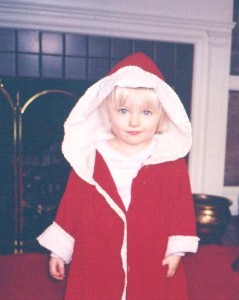 I was born to a family of savers and recyclers. Among the many boxes in my parents’ attic are several that contain my mother’s old sewing patterns, clearly marked and dated, from the 1960s on.  When Mama decided that my daughter needed her own Red Riding Hood robe like the one I had worn in the Christmas photo from 1965, she used the same pattern.  D loved her version and wore it for years.  Here she is at age three in 2002:  another little blonde girl in red, happy to be visiting her grandparents.

As I think more about the photos of our first, unfortunate Georgia tree (see previous post), I understand better why it looked the way it did.  When my parents were growing up in small Kentucky towns, Christmas trees weren’t big business.  They were barely any business.  Getting a tree was an exclusively do-it-yourself endeavor.  Choices were limited, and the ideal of the perfect, cone-shaped tree didn’t exist, at least not in those rural areas. Maybe the fashionable Seelbach Hotel in Louisville decorated a neat, Tannenbaum-style fir, but then again, maybe not.  My mother remembers her father and brothers going out in the fields on their land in central Kentucky and bringing back a tree they’d cut themselves.  Daddy, from an Ohio river town in the northeast part of the state, recalls going with his dad farther up into the holler and chopping down a tree.  They got what was available, what they could cut, what they could haul.   Throughout Kentucky, in those years, the typical Christmas tree was a cedar.  Bushy and lacking much definable shape, their branches were fine, thin and fragrant.

It was only after they were married that my parents exchanged money for a Christmas tree.  As my mother remembers, they bought the first tree for their new house in Lexington from an old man who sold cedars he cut himself.   The photo below dates from 1964 and shows a full but rather ungainly cedar that was the standard of my early childhood. 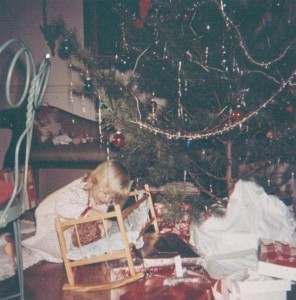 On Christmas morning in our house in Lexington, my hair still in rag-tied curls, I’m happily discovering Santa’s gifts of a “Debbie Eve” baby doll and a cradle.  We would head to my grandparents’ later in the day, for Christmas dinner.

Christmas Eve, 1965, with Mama in the living room of my grandparents’ house.  Our smiles appear to be heartfelt.  We were right where we wanted to be. 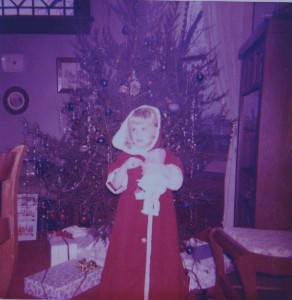 Christmas morning, 1965, at my grandparents’ house.
I’m in the new red corduroy housecoat Mama made me, holding my new doll Amy.  In my cloudy half-memories, this was a perfect Christmas day.

We had planned to get our Christmas tree last Sunday after church.  (We put up several artificial trees in early December, but wait until mid-month on the real tree.) At breakfast that morning, our daughter recounted the dream she’d been having upon waking: H and I had decided to surprise her by going out for the tree while she slept.  By the time she came downstairs, we had it set up and decorated.  It was not a good-looking tree.  D tried to hide her disappointment in not being included in the tree outing, in our choice of an unfortunate tree, in its awkward placement, and in our bad decorating.  When she reached out to touch it, the trunk collapsed in on itself like a patio umbrella stand.  It had been tall and ugly; now it was short and ugly.  Once fully awake, she was greatly relieved to find no tree at all in the living room.

Her dream reminded me of some old photos from my childhood featuring particularly unsightly Christmas trees.  D had seen them before, but had forgotten, so the impact was strong. 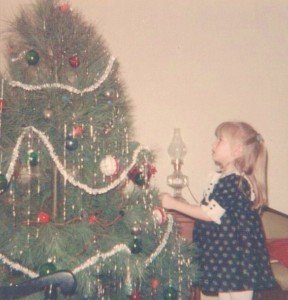 These photos have mystified me for years.  They were taken in our first house in Atlanta, a little rental ranch in the Montreal Woods section of Tucker.  When I think back on the Christmases of my childhood and teen years, I set them in the home we bought two years later, in the Morningside area.  As I remember, it was graced annually with a nicely shaped, well-decorated tree, usually a Frazier fir.   Why, then, were these trees, from the more distant past, so very ugly? 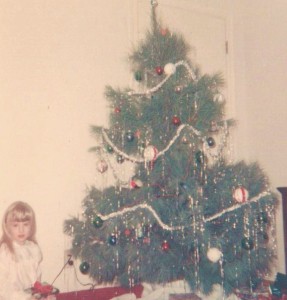 Upon recent re-examination of the photos, I assumed they showed two different, but equally unattractive trees, from consecutive years.  (Dates on our family photos are often missing or erroneous.) The first captures a hulking, bushy tree.  I look up at it with awed trepidation.  In the second, I sit forlornly beside a presence that resembles a raggedy, monstrous figure, small-waisted and large-hipped.  The broad expanse of blank white wall adds a further degree of bleakness.

Then I noticed that in another picture of the monster tree, I’m wearing the same black dress and blue barrettes as in the bushy-tree photo.  Could we really have had two such sad-looking trees in the same year?  Was the first so terrible that we took it down and swapped it for another, late in the season, when the pickings were even slimmer?  Maybe the first one kept falling over?  (I have vague memories of toppling trees on rickety stands.)  Or maybe the needles dried out within a few days?  I phoned my parents to see if they could offer any clarification.   They didn’t think we ever had two trees in a single year.  They did remember that we had some less than stellar trees in the Tucker years. 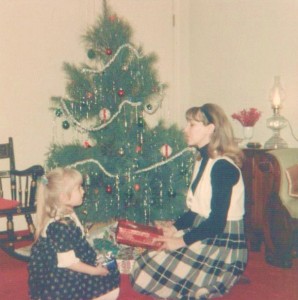 It had to be the same tree, one with the added distinction of looking bad in various ways depending upon the angle from which it was viewed.  The same ornaments appeared in similar spots; the same aluminum-foil tinsel was draped haphazardly over long-needled branches.  In the photo above, Mama and I seem to be trying to put on a good show, to pretend gamely that we’re perfectly content in the presence of this strange tree.  Here we are, happy and well-dressed, holding these gifts expectantly.  We could be a family on a Christmas card.

Mama’s memory of that tree was as hazy as mine, but other details of that season she recalled vividly.  Ever since she and my father had married, they had spent Christmas with her family in central Kentucky.  My birth hadn’t changed this; Christmas would find us in the farmhouse with my grandparents, surrounded by aunts and uncles.  But that year, after our move to Georgia, we weren’t traveling.  We could have our own merry Christmas, just the three of us. We would.  We’d do it. 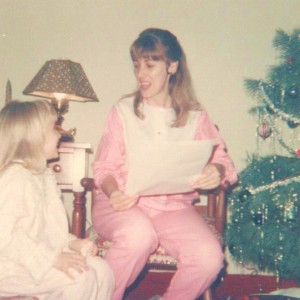 We tried.  In the photo above, we continue with the Christmas card images.  Mama reads ‘Twas the Night Before Christmas, and I look giddy and act like I’ve never heard it before.  We’re both wearing new pink flannel PJs.  Our long hair is neatly brushed.  Beneath our fake smiles, you can see us grimly willing those visions of sugarplums to dance, dance, dance.
It didn’t work out. There were no sugarplums.  We missed our family.  We missed the big old house.  We missed our tradition.  It just didn’t seem like Christmas.  As a young child, I tended to carry an outsized burden of multiple anxieties, for no reason that could be explained.  That Christmas Eve, I was sad and inconsolable.  I couldn’t stop crying.  I was exhausted, but I couldn’t sleep.  Mama, loving and patient, sat with me, late into the night, holding my hand and offering assurance.  She had grown accustomed to this process, but usually it wasn’t quite so painful or long-lasting.

No theological implications here.  Just a dog too sleepy to mind being wrapped in synthetic greenery.  My daughter has always found it disappointing that Kiko refuses to cooperate and wear the typical doggie costume.  No devil horns for him at Halloween, no reindeer headband for the Christmas photo.  But this year, as we were hanging the stair garland, he lacked the energy to care, or perhaps to protest, when she decided to adorn him, as well. 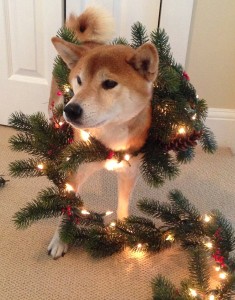 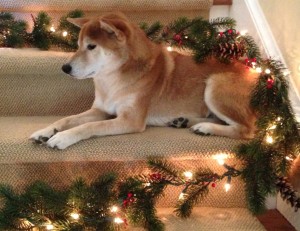 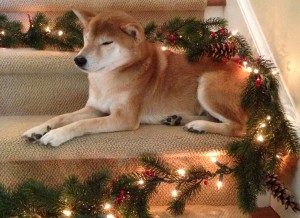 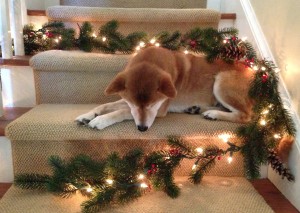 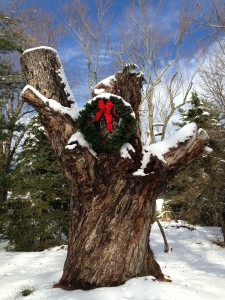 This December, we hung a big wreath on the craggy maple stump in front of our house.  It seemed like an interesting, if unexpected, spot for a wreath.  And by decorating the tree, we could send a message to those who might see it as a business opportunity, as well as to those who think the stump is unsightly and wonder why we leave it standing.  The wreath says, We love this old tree trunk, and we’re letting nature take its course.

Then I thought a little more about it, and the pairing struck me as even more appropriate in its juxtaposition of life and death.  The stump is the opposite of the traditional evergreen Christmas tree.  Firs and spruces, retaining the appearance of vitality through the winter, get the privilege of being cut down, hauled into our homes, strung with lights and ornaments, and left to wither and die.  It’s tough work, being a symbol.  Our maple, though, would be in no such danger.  If intact, it would be gray-brown and leafless by now, like its neighbors in our yard.  But of course, it’s a stump, a snag, and already dead.  Yet it harbors vast, unseen colonies of creatures that go about the business of breaking down lifeless material.  It won’t be long before nature’s course is run.  The stump may not be here next year; its center is soft.  All the more reason to decorate it this year.

My husband and daughter hung the wreath one weekend afternoon, as I was napping, trying to get over a persistent cold.  When I trudged out to the road to see their handiwork, a new insight hit me.

I like to think that God works with us for good, despite ourselves, despite our selfish intentions and our vanity.  I initially wanted to decorate the tree because I thought it would look pretty, if a bit odd.  In truth, it was a way of declaring a certain pride in being different, in having the ability to see beauty where others see ugliness.

But once up, the wreath reminded me of a greater truth, of the essence of my Christian faith.  Out of death comes new, transformed life. How better to say it than in the words of John 3: 16:

For God so loved the world that he gave his only Son, so that everyone who believes in him may not perish but may have eternal life.

And then the snow settled beautifully on the wreath and the tree, on the green and the gray, on the quick and the dead, like a blessing from above.

We awoke yesterday to the beginnings of the first snow of the season, falling lightly but steadily, as predicted.  By the afternoon, tiny ice pellets had muscled out the snowflakes.  The  emergency announcement of Monday’s closed schools arrived early enough for our daughter and her friends to rejoice heartily and take advantage of the snow day before the snow day.

This morning, the sliding, swishing, crashing sound of falling branches served as our  alarm.  I looked out to see a substantial chunk of one of our silver maples settling in across the driveway.  The white pines were bowed down, heavy with ice.  Tree branches and foliage had been artfully and glisteningly encased in silvery elegance.  It was beautiful, but treacherous, as tree limbs continued to crack and fall all around. 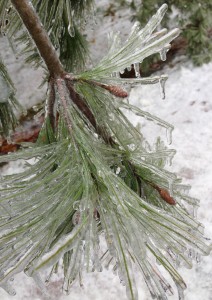 Each pine needle received its own individual ice casing. 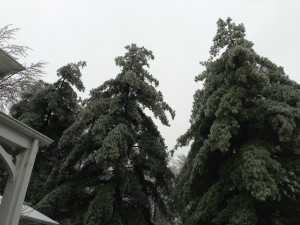 The white pines took on a hulking, menacing aspect. 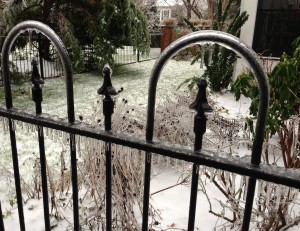 Our iron fence got a frosty make-over. 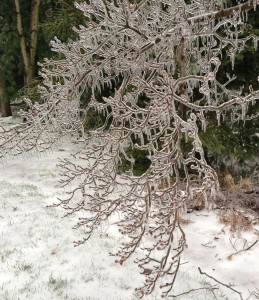 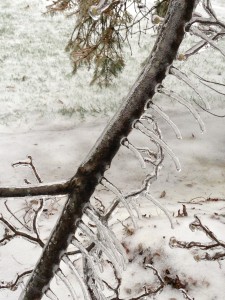 Ribs of ice, frozen on this branch at a striking angle. 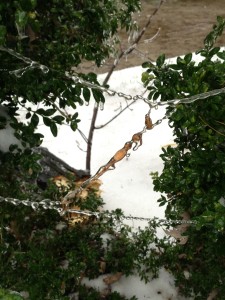 Strands of an ice-covered spider’s web. 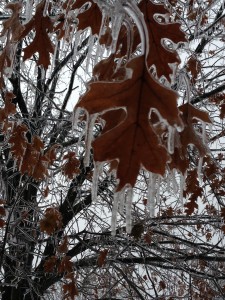 Oak leaves, tough and persistent, appear uninclined
to give in to the pull of their ice jackets. 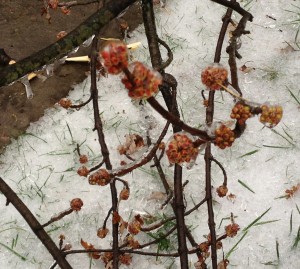 The fallen maple branches, ever-prepared, were already in bud.