Until today, we had never spotted a raccoon in our yard, or even in our immediate neighborhood.  Deer and squirrels are routine. Foxes are frequent. Once, when my daughter was very young, she alerted me to the presence of two animal control officers walking across our front yard:  There are two people with big guns, Mama!  Turns out they were in search of the infamous rabid skunk that had been roaming the area.  But the raccoons, they had stayed away.

I was eating breakfast when I heard Kiko bark from the yard. Of course, he rarely makes a sound. And this was a different kind of bark: a single woof, with an excited edge to it. I ran out to the porch to see my little dog face to face in the grass with a raccoon. Of course, I feared he would get bitten or scratched. I was afraid the raccoon might be rabid. Nearly every week, there’s at least one account in the Public Safety notes of the local newspaper of a dog quarantined after tussling with a sick raccoon.

Kiko was keeping some distance between him and the interloper, while backing it toward the fence. I clapped my hands loudly and yelled repeatedly, “Go Away!,” Get outta here!” The raccoon got the message, hastened its retreat, and squeezed through the bars of the fence. Once on the other side, it clambered up a Leyland Cypress in our neighbor’s yard. From a perch in the branches it peered down at us, composed, charming, and terribly cute. Kiko sat below at rapt attention, expectant, itching for another chance to show this foreign visitor what’s what.

We kept watch for a while. I wanted to make sure the raccoon wasn’t behaving erratically or showing signs of illness. As far as I could tell, it appeared to be a perfectly healthy specimen, handsome, well-fed and fuzzy. With an enviable sense of self-possession, it seemed content to observe us calmly and wait it out in the tree. After a while, and with much effort, I dragged Kiko away and onto the porch, where we watched as the raccoon carefully, unhurriedly, climbed down from the tree and disappeared into the bushes beside our neighbor’s deck.

Is this the first of many more such masked visitors to come? Or simply the appearance of a rebellious loner who got off track? While it’s hard to imagine a more cuddly-looking creature, for Kiko’s sake, I hope it spreads the word that inside our fence no warm welcome awaits. I hope it tells friends and family of its close brush with a fierce, red, fox-like monster. 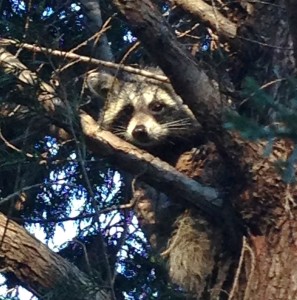 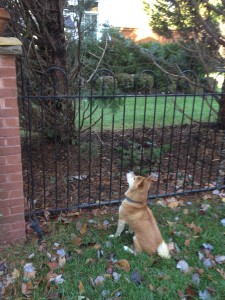