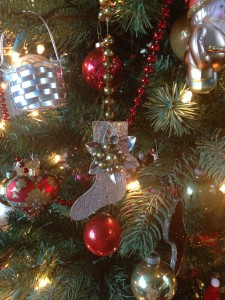 Our family places particular value on the well-seasoned, the tried and true, so it’s not surprising that some of our favorite Christmas ornaments are those that have been with us the longest.  The one that most resonates for Mama is this little cardboard foil-covered stocking.  It’s likely the oldest of all our decorations.  She remembers when her brother Edwin, six years her elder, and only ten or eleven at the time, rode his bike to town and bought it.  All the family decorations were so old, he said; it was time for a few new ones.  The year may have been 1939 or 40.  The foil on the stocking, the shiny gold beads on the chain, and the metal on the attached shiny red ball suggest it dates prior to 1943.  By that year, the war effort had commandeered nearly all metal for military needs. (Mama added the silver and gold star much later, to replace a lost and long forgotten adornment.)

Christmas ornaments, of course, are much more than baubles.  Those we most cherish are talismans that conjure our younger, happier, better selves, perhaps in homeplaces now transformed beyond recognition. They speak to us of beloved family and friends as we’d like them to be.

So it is that the little silver stocking brings back Edwin as a boy.  At the time, he was my mother’s favorite person in the world.  Wise and witty, with an appreciation for the absurd and the odd, he could inject fun into any situation.  Mama and Edwin saw the world through the same eyes, and she adored him.  He made everything better.  That’s the Edwin Mama remembers with such joy, the Edwin she sees when she hangs his foil-covered stocking on the tree.