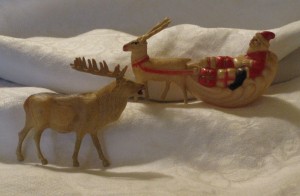 As everyone in my family knows, one of my most frequent complaints concerns our vast and ever-growing accumulation of stuff: the multitudinous thingamajigs, treasured by some, considered garbage by others. These are the small, awkward, ambiguous objects I seem to be constantly moving from the kitchen table. They tend to scatter all over the floor, but I feel compelled to seek out every last one because the dog may eat them. Occasionally I think I could walk away from all the stuff without a second thought, free at last. Certainly I could walk away from all their stuff. Once in a while, I even think I could leave my stuff.

Then, I remember these two small, rather subdued-looking Christmas figures: a stern-faced Santa with his sleigh pulled by a single reindeer, and another, somewhat larger, more finely detailed reindeer. I found them at our church yard sale, at a table of miscellaneous junk offered by an extremely old man. I got distracted, moved on, and forgot about them. I was returning home, waiting at an everlasting traffic light, when I remembered them. I was being silly, I told myself. I didn’t need more stuff. But I couldn’t follow through. I wanted those two Christmas knickknacks. They were calling to me. I turned around, had to wait for the light again. I got back to the old man’s table, and miracle of miracles, they were still there. Apparently their plaintive cry was inaudible to others. I think I paid a quarter apiece, his asking price. I didn’t haggle. I’m so glad I doubled back for them.

My appreciation of these little trinkets has nothing to do with monetary value; I’m under no misconception about getting the deal of the century or heading off to Antiques Road Show. The Santa appeared in a December issue of Martha Stewart Living, in an article about celluloid holiday figures from the 1920s – 50s that were sold at 5 & Dime stores. My little Santa may date from the 1930s. No doubt he’s worth more than a quarter, but not substantially.

I just like these two little doodads. I find them inexplicably pleasing, even comforting. They are reminders of a simpler time, when we weren’t quite so awash in stuff, when the choices were fewer, when each little thing meant more. I can see the old man who sold them to me, a Depression-era child (looking something like Ralphie in A Christmas Story) using his allowance savings to buy these as a gift for his mother or sister.

I will protect my tiny Santa and reindeer from those who might regard them less highly. I will try to respect the little things that beckon to my family members but not to me. And I won’t leave my treasures on the kitchen table.