At my high school, the junior class began Valentine carnation sales in early February as a prom fund-raiser. During our freshman year, my two best friends and I didn’t grasp the magnitude of the event. I had had my wisdom teeth removed shortly before February 14 (a procedure that, amazingly, required a two-night hospital stay, the same as for the birth of my daughter), so I was preoccupied. But I clearly remember the day the carnations were distributed during homeroom. I didn’t receive any, and it was not pleasant. It was especially unpleasant to be surrounded by those who were greeted with bouquets scaled more appropriately for Derby-winning horses than for teenage girls. My memory may be somewhat warped here, but its essence is true. Those blessed with flowers carried them around from class to class all day long, so each hour brought with it a new group of lucky carnation-bearing kids.

As sophomores we got with the program. The three of us sent flowers to each other, the envelopes signed “from a Secret Admirer.” As an investment, we also bought carnations for several boys in our circle. We chose funny, thoughtful boys who were likely to return the favor next year. When the flowers were delivered, we each received an additional one from a senior boy who had taken a big-brotherly interest in the three of us. Getting three carnations, even if none was from a potential boyfriend, was far preferable to walking around all day with none.

The next year, the boys did their duty, and by that time, we all got a couple of flowers from other friends. We had learned how to work it, and the annual event had become almost enjoyable.

By senior year, the day was a real pleasure. My two old friends and I were closer than ever. We each sent a number of carnations and received quite a few. I had a boyfriend by then, and he came through with candy, as well. How wonderful to receive Valentine candy I could feel good about! My friends and I made GQ-spoof magazines for our favorite boys. We wrote silly captions for clippings snipped from National Lampoon, Seventeen, and a French fan magazine our teacher had suggested we subscribe to. We called it Hunky-Stud Quarterly: The Magazine for Discerning Gentlemen. We found it hilarious. The boys, though pleased, were probably not quite as bowled over by our humor.

It took us four years, but we had mastered the art of the high school Valentine’s Day. Unfortunately, we had to start from scratch again the following year, because things were different in college. 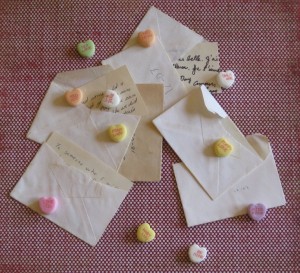 My carnation cards from Valentine’s Day, senior year (of course I saved them). 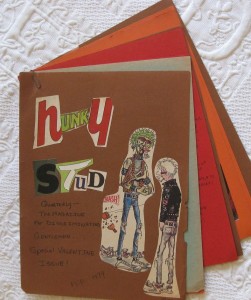 A rare edition of Hunky-Stud Quarterly. I have this copy because my high school boyfriend returned everything I had ever given him after we broke up.  He left it all on the front porch in the middle of the night.  Evidently he knew I would appreciate it more than he did.

And he was right.