My husband’s grandfather was “Grandpa,” so his father became “Grandpa” to our daughter.  H’s mother was happy to be “Grandma.”  For four years D was the only  grandchild on H’s side of the family, so she received especially big doses of love and attention from Grandpa and Grandma. 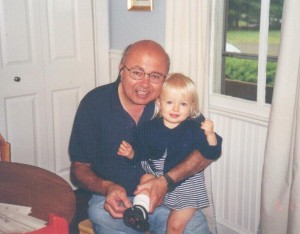 Both sets of grandparents visited regularly during our daughter’s early years.   She excitedly awaited their arrival each time, and no matter how long they stayed, she was sad to see them go.  Here she gets a hug from Grandpa before they drive back to Rochester. 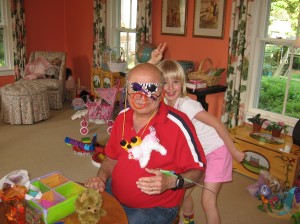 Grandpa might well have an advanced degree in Absurdist Theatre.  He gladly goes to great lengths for a laugh, and his antics earned him the nickname “Crazy Grandpa” from D.  As is evident here, he never minded being decked out for comic effect.  The scattered toys are evidence of a full day of play.

One spring Grandpa and Grandma arrived with a toy cash register as a gift for D. It had a scanner and a microphone for price checks. All day long, Grandpa and D priced items and conferred via microphone: Price check on kumquats. Is that kumquats with wings or without? With fur or without? D never tired of Grandpa’s nonsensical questions and replies. When D outgrew the cash register, we passed it on to her younger cousins so Grandpa could continue to enjoy it. 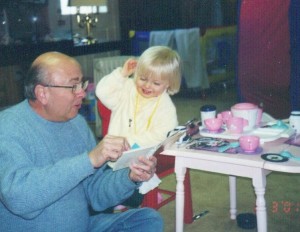 An exercise that never failed to produce smiles was Grandpa’s comic mis-reading of D’s storybooks.

Crazy Grandpa, appropriately, is a master of crazy faces.  This talent is much esteemed by our daughter, although one time he went too far.  He began with a mildly crazy face, but he allowed it to morph into a truly demented face, so much so that D burst into tears and ran from the room.  That taught Grandpa where to draw the line, and he never made her cry with his craziness again. 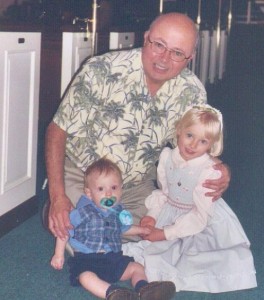 Grandpa abandons his crazy persona when necessary.  Here, he is a proud grandfather as well as father of the bride at his daughter’s wedding rehearsal.  D was overjoyed to be the flower girl in her aunt’s wedding, and her little cousin was an adroit ring bearer. 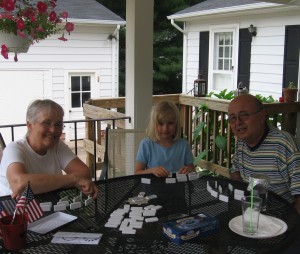 Dominos with Grandma and Grandpa, on our old back porch.

Grandpa and Grandma are always up for a board game. When I very much needed to catch up with laundry or some other daily chore, they graciously filled my daughter’s days with Hi Ho! Cheerio, Candyland, Chutes & Ladders, checkers, Chinese checkers and Jenga. There were card games, too.  Grandpa’s banter is hilarious during Uno.  He constantly accuses Grandma of cheating, and of course Grandma would never cheat, not in any game. Uno remains a rainy-day staple when we’re together at Cape Cod. Grandma, according to Grandpa, is still up to her nefarious schemes. 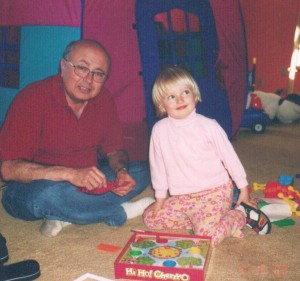 D is clearly hatching her plan to imprison Grandpa in her playhouse, visible in the background.

Every once in a while, even Grandpa and Grandma suffered game fatigue.  When this happened, Grandpa might dip further into his store of craziness.  D, of course, never flagged when she was face-to-face with a fellow playmate who possessed a flair for the ridiculous.  One afternoon following many games, D lured Grandpa into her brightly colored playhouse.  I had come to look upon that playhouse with dread, as it was the site of interminable tea parties on the long days when she and I were alone.  Tea would end, and I was on the verge of escape, but then it was time for a pretend dinner, and breakfast followed immediately.  Suddenly we would be in the midst of reenacting scenes from The Little Mermaid.  I got awfully weary of being Ariel’s father, especially in the confines of that playhouse.

Grandpa, however, was unaware that the house was actually a cheerful-looking prison.  He never even knew he was a captive.  He amused D by surreptitiously tossing stuffed animals on the roof of the house, using a variety of odd voices to exclaim “I think I heard something on the rruff!  Did you hear something on the rruff?”   As Grandpa understands, sophisticated comedy usually isn’t required to get laughs from a young granddaughter.  He also knew, or at least hoped, that he’d get a short nap in before dinner. 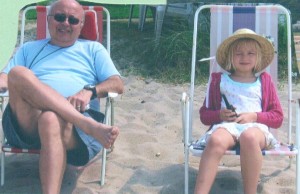 D agrees with her Grandpa and her Daddy that the most wonderful place in the world is outside our little rental cottages at Cape Cod.  Our annual vacations at the Cape are one of the highlights of summer.  When D was young, she looked forward to the nights when H and I would go out to dinner alone, because that meant a full evening with Grandpa and Grandma in their cottage.  It meant making unusual creations with the new Play-Doh fun factory that arrived with them each year.  It meant games, imaginative drawings, good snacks and Grandpa cooking chicken on the grill.  Sometimes it meant looking for shooting stars out at Herring Cove Beach.   Needless to say, H and I always enjoyed the free babysitting by such an enthusiastic and experienced duo.

D still treasures her evenings with Grandpa and Grandma in Cape Cod.  And every morning upon waking, the first thing she does is  look out her window.  If Grandpa is there, settled in his beach chair, gazing out at the bay, all is indeed right with the world.