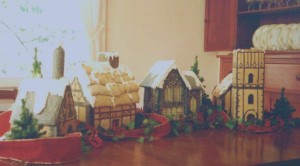 Back in 1989, home from grad school one winter break, I had enough free time to try my hand at making a gingerbread house. I had spent the previous year living in England researching my dissertation, and visions of picture-perfect country villages were rattling around in my head. I loved the quaint homes lining narrow lanes, the dwellings in use since medieval times and only gaining in charm over the centuries. I was especially fond of the thatched cottages with their half-timbered facades and slanting walls. When I saw Martha Stewart’s masterful gingerbread replica of her Turkey Hill farmhouse, I was further inspired. I liked its relative architectural correctness and its conspicuous absence of frou-frou candy cuteness typically associated with gingerbread buildings.

So I set out to make a thatched cottage. I used Martha Stewart’s recipe and diligently followed her gingerbread-baking tips. I remember thinking my mother was overly uptight when she expressed some dismay at my timing; I began rolling out the dough a day or so before our annual Christmas party. Now I know exactly how she felt. Recently I was struggling to prepare for out-of-town guests when I noted with incredulity that my daughter had plunged into an ambitious beading project that required table surfaces in several rooms. Mama, please accept my belated apology!

That first house took about a week to bake and assemble. If I had thought I could finish it by the party, I was certainly mistaken. It wasn’t even done by Christmas, as that year’s holiday photos attest; it can be glimpsed in the background, roofless, Progresso soup cans supporting its walls. But by New Year’s Eve it was complete, from its Gothic windows, snow-topped chimney and roof of Shredded Wheat, which bears a remarkable resemblance to thatch.

Gingerbread is generally considered a fragile, impermanent medium. But this is not necessarily the case. Like the thirteenth and fourteenth-century cottages I so admired in England, my first gingerbread house has had a long life. It is still with us. The strength of royal icing, a mixture of powdered sugar and egg whites, should not be underestimated, and a clear acrylic spray does wonders to protect gingerbread surfaces.

During the 90s I made other houses and several churches, all in a subdued palette and reflecting various medieval periods. A gingerbread village evolved. Each January I flew back to New Jersey, leaving my mother to deal with the increasingly time-consuming task of storing the houses. She was a faithful (if somewhat understandably resentful) curator of the collection. She kept the village on display atop the hall bookcases until after Valentine’s Day, when she sealed the houses in plastic bags and carefully taped boxes.

By the time H and I bought our home in Virginia, Mama was eager to retire as gingerbread caretaker. House by house, the village began the trek from Atlanta in the back of my parents’ station wagon. I saw, with some alarm, that it would be up to me to deal with the complicated preservation demands of theoretically edible structures prone to decay.  As in every craft project, the fun is in the design and fabrication, not in routine maintenance. I wasn’t sure I wanted this new role, but abandoning the houses to the trash bin was not an option. 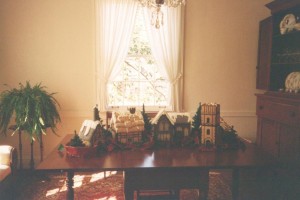 The first four buildings of the gingerbread village, displayed
in my parents’ dining room in 1993.