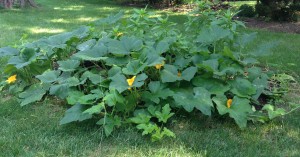 This summer, the compost pile in the remains of our maple tree stump has found new life as a squash garden.  No planning or intentional planting was involved.  Last fall we deposited many squash seeds in the compost, and evidently squash loves compost.  The decaying wood of the old tree was quickly hidden by fuzzy, thick vines sprouting large green tri-lobed leaves.  Tightly curled, wiry tendrils of vine anchored themselves to the grass, gaining ground.  And then the bright yellow blossoms started popping up.  The last time the tree stump played host to anything this interesting, it had been a lichen extravaganza. 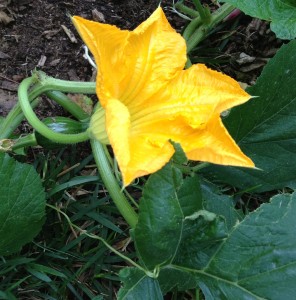 I wondered why most of the blossoms never bore fruit.  I thought it was something to do with a deficiency or an excess in our spontaneous squash patch. 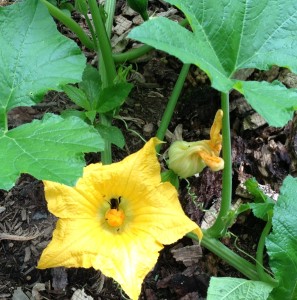 But that’s not the case.  I recently learned that squash plants produce both male and female blooms.  Only the female blossoms, if visited by bees carrying pollen from male plants, will develop into squash.  I noticed that the bees didn’t typically flit quickly from flower to flower in the squash patch.  They immersed themselves, heads down, in the depth of the blossom for long periods, seeming to luxuriate in an abundance of pollen.  Sometimes two or three bees would settle in at the same flower.  There seemed to be plenty of the good stuff to go around.  When they finally emerged, they moved lethargically, a bit like over-served drinkers stumbling from a bar as dawn breaks.  The dark form in the photo above is one such seemingly contented bee.

It’s easy to tell the difference between male and female squash blossoms.  A plant produces far more male blooms than female.  The males sprout from long, thin stalks in the upper parts of the plant.  Female blossoms appear near the base of a thick vine.  They seem to grow from a small, bulb-like proto-squash.  These are partially visible in the two close-up photos above. 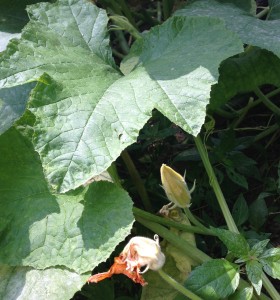 Two male squash blooms, one fresh, one wilting, appear in the photo above.   Now that I know I won’t be sacrificing future squashes, I might try harvesting a few boy blossoms to cook.   Although, maybe not, because I hate to deprive the bees. 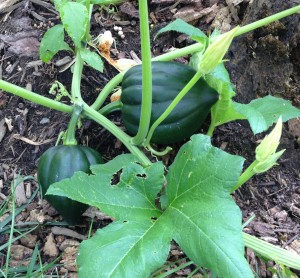 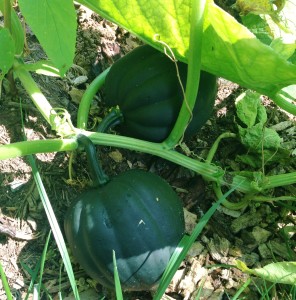 I thought I recognized the big leaves in our squash patch.  They resemble those of the acorn squash the squirrels planted among our black-eyed Susans last year.  There are now two dark green acorn squash hiding under the foliage.  I’m hoping they remain overlooked by local wildlife so I can let them stay on the vine to ripen for a while yet.  As I’ve learned, stuffed acorn squash makes a tasty fall meal. 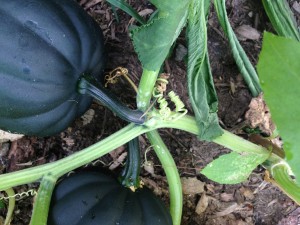 The photo above shows spirals of thin, pale green threads, like wire wrapped around a pencil, that sprout from the larger vines. 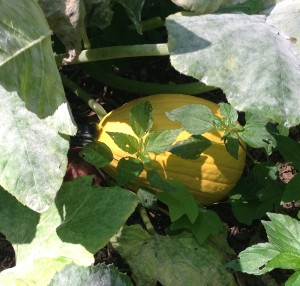 There were two kinds of leaves in our squash garden. From a vine with somewhat smaller foliage, there has appeared an elongated oval variety I’d simply call a pumpkin.  It’s gone from white to pale yellow in the past week and is now about the size of a typical grocery store eggplant.  I’m hoping to see it turn bright orange and join us for Halloween.

Of course, by that time, the compost may have something completely different in mind.