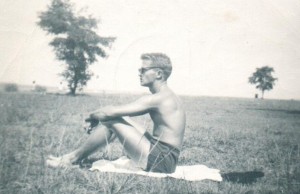 My father’s birthday was earlier in the week, and he’s been on my mind recently. At every stage of my life, he has been the father I needed. It seems fitting to spend some time trying to define the qualities that make him so special.

The first thing that must be said about Daddy is that he is very handsome. As a baby, he was adorable. As a little boy, he was impossibly cute, but the mischievous gleam in his eye and determined set of his jaw made it clear he was no pushover. As a young man, he was a heart-throb. When my mother first spotted him on the University of Kentucky campus, she knew he was the best-looking man she had ever seen. He was movie-star handsome, and, as an older man, he still is. He has aged slowly and well, with dignity and a kind of easy elegance.

Daddy wears his good looks lightly. He has none of the arrogant entitlement often associated with handsome men. If Mama and I exclaim over an old photo showing him at his fabulous best, he may laugh or remark at how much his ears stick out. He isn’t inclined to talk about himself or his feelings, but his perfectly calibrated sense of assurance is always evident. Daddy is never smug or boastful, but his self-confidence is a sure thing. He doesn’t rethink past decisions, nor is he plagued by doubt or remorse. If he has ever been anxious or worried, he has kept it hidden. His outlook is sunny. When trouble comes, he deals with it and moves on.

My father has nothing to prove. Unless he is challenged. Then, he has no fear. He doesn’t hesitate to offer an opinion at odds with those of friends or acquaintances. Should the need for a physical confrontation arise, he does not shrink from it. He has the grace and fitness of a natural athlete. For a while, Daddy and his office buddies played basketball during lunchtime. The head of the department, a big bulky guy, was a bully on the court. He made up for lack of skill by pushing, elbowing, and playing dirty.  After one annoying shove too many, Daddy punched the boss in the stomach, knocking him flat. My father didn’t hesitate, and he didn’t apologize. When the man got up, he was duly chastened. He never pushed or poked any of his colleagues again. Daddy doesn’t dwell on such events; he isn’t one to bask in moments of glory. He did what needed doing, and that was that.

Daddy is fiercely loyal to those he loves, and his persistence is unmatched when a loved one needs help. Mama wants a heavy piece of furniture moved into a difficult space? He’ll get it there if it means dismantling the entire room. I need a ride to an obscure part of the city? He’ll drive me, and he’ll make sure I get back home.  I awake in the dead of night to discover a gargantuan flying cockroach perched on my water glass? (This was a not-infrequent occurrence in Atlanta growing up without air-conditioning). He’ll be there in seconds, a rolled-up newspaper in hand, and that damned bug doesn’t stand a chance.

If his family feels strongly about something, my father embraces it, too.  My mother has a talent for interior design. She is a serial decorator who likes to refresh fabrics and color schemes often. Once she decides a room needs new paint, wallpaper, or upholstery, Daddy is on board. He does the heavy lifting, as well as whatever else is asked. If I’ve bought a new dress, he loves it. It’s been years since we shopped together, but I remember his offering to buy me anything that caught my eye.  During a trip to Kentucky, my daughter was looking forward to searching for geodes along the river bank, as we used to do when I was her age.  But the old path was gone, and the climb down from the bridge was steep and overgrown.  Most grandfathers would have said it couldn’t be done.  Not Daddy.  He found a way to get us all down to the river, and back up again, safely.  His priority is the happiness of those he loves, and he will go to great lengths to ensure it.

I realize now, with sudden clarity, that my father’s greatest gift to me is the absolute, unwavering certainty of his love and support. Never have I doubted for a moment that Daddy loves me with anything less than his whole heart. Perhaps even more amazingly, he has always let me know that he considers me the best, the smartest, the most beautiful daughter possible. It’s not simply a case of his telling me so; I think he truly feels that way. Of course I know I’m not, but his believing it means everything.

*My mother is no less remarkable, but her birthday isn’t until June. 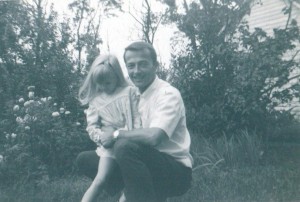