Every weekday morning, as my daughter heads to the bus stop, Kiko and I are off on our morning walk. He is eager to sample the wealth of smells, sights and sounds the new day brings. His peppy, prissy little walk resembles that of a prancing circus pony. We’re usually out for nearly an hour, and we move quickly. We often meet friends, both two and four-legged; Kiko is an enthusiastic greeter of all fellow walkers. His exhilaration is contagious. Even on those days when I’d rather be sleeping, once out with my little dog, there is no place I’d rather be.  (Here he is, ready to go.) 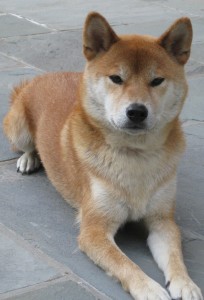 Later in the day, Kiko’s joie de vivre is considerably diminished. He has passed a demanding morning sleeping soundly on the playroom sofa. He’s restless, and it’s time for a walk. But he is ambivalent at best. Does he really want to go? Wouldn’t it be better to sleep a little longer? Have a snack? Play with foxy? He is uncertain; he is bored. Perhaps I’m reading my dog too deeply, but sometimes his attitude seems to be one of profound regret.

Only a ride in the car can lift Kiko out of his funk. The slightest jingle of a car key awakens him from dreams of successful squirrel hunting. His favorite sentence is: “Kiko, do you want to take a ride?” These words are the equivalent of the reset button. Upon hearing them, he tilts his head, stretches, shakes vigorously, and he’s recharged. His greatest desire is that the ride will lead to a walk in another neighborhood, one more interesting than our own. When this happens, his exuberance is as boundless as it had been in the morning.

I try to accommodate him. When the weather permits, he goes with me on errands. But even I find it ridiculous to drive the dog around every single day to elevate his mood. There are afternoons when I insist we walk along our own street.

It’s during these walks that Kiko tends to flaunt his array of annoying tactical maneuvers. They include:

• Scrambling like mad as though to avoid an approaching predator, straining sideways at the leash so his body forms a sharp angle to the road. (This requires a great expense of energy for both him and his walker.)

• The sudden dead stop, feet splayed out, head down, collar puffing out the sides of his face dramatically. (He used this move often when H tried to jog with him.)

• The missile launch leading into a fast sprint, best performed after the dead stop.

• The exhausted plop-down, usually attempted in the center of the road.

• The pause to eat grass, which he chews with the thoughtful delicacy of a connoisseur. (More frequent during periods of pouring rain.)

• The double back: once moving, a quick turn-around to head in the opposite direction. (Especially popular when time is limited.)

• The serpentine: darting impulsively from one side of the road to the other, typically attempted when cars are approaching quickly. (Is he suicidal?)

It would seem that simply turning toward home would put an end to some of these behaviors. Unfortunately, Kiko differs from the horse that runs only in the direction of the barn. He remains conflicted no matter which way we’re going. Sometimes it’s necessary to pull him repeatedly by the collar. If worse comes to worst, he can be carried, because he weighs only twenty-five pounds.  I’m very glad he’s not bigger.