Toward the beginning of this Christmas season, my daughter printed out a Family Christmas List, with spaces for gift requests from each of us.  She posted it in a central location in the kitchen.  At first I couldn’t think of a single item for the list.   I have enough stuff.  And on those occasions when I do need something,  I generally prefer to pick it out myself.  Soon I thought of one thing:  a nice winter scarf suitable for dog-walking.  I’ve had the same one since 1987.  While it’s still perfectly good, another would be welcome, and D has a good eye for scarves.  Somewhat later, in a flash of light bulb inspiration, my dream gift popped into my head:  shoe storage!  This, indeed, may be a gift that keeps on giving.

Our house, as I’ve noted before, is closet-challenged.  It’s a four-square farmhouse built in 1920.  Closets and bathrooms were added during the early 1970s.  Orange shag carpeting was also installed in copious amounts at this time, one reason the house remained on the market for so long before we bought it ten years ago.  We have a wide center hall but no optimal storage on the first floor unless one counts the closets in a bathroom and in an office that doubles as a bedroom when overnight guests are plentiful.  Neither space is ideally located, to say the least.

For a family of three, we have an inordinate number of shoes, especially those for outdoor activities.  We have shoes for running, for gardening, for hiking, for use in snow, in rain, in rivers and oceans.  We have high boots, low boots and medium boots, most of which are typically caked with mud and leaf debris.  We have many pairs of old, scruffy shoes saved for the messiest of uses:  walking through mucky fields, exploring the creek, climbing trees, working in the garage or the basement, etc.  Some are very nearly too small or worn out but still may be of use in a pinch, if, say, all our other shoes were swept away in a tornado.  These are too shabby to be given away to any charitable organization, but too good, it seems, for outright disposal.  As H’s father would say, we have back-ups for our back-up shoes.  And then there are the comfy shoes, the legions of slippers, rarely worn.  They stay with us, it seems, out of habit and for the sake of occupying space.

Our  shoes tend to congregate in the kitchen around the back door and in the hall by the basement door.  Like so much household detritus, they evidently have the ability to multiply spontaneously.  Opening either door is impossible without first rearranging great piles of shoes.  I dislike this process as much as I dislike moving the little things off the kitchen table.

I’ve been complaining about our lack of shoe storage for nearly as long as we’ve lived here, to little avail.  I usually deal with it by stomping around angrily and muttering derogotory remarks about my beloved family members while hauling their shoes upstairs or downstairs.  This does not make me happy.

I finally realized that the problem might be solved by incorporating it into a gift request.  My husband and daughter take gift requests very seriously.  They excel at tracking down gifts (and they enjoy gift wrapping challenges, but that’s another story.)  Several years ago I began asking that the impatiens be planted as a Mother’s Day present.  Therefore, on Christmas morning, I opened a substantial package containing varieties of shoe storage:  hanging racks, standing racks, storage boxes with hinged lids, others that defy easy description.  On December 26, shoe storage solutions were installed and in use.  I was delighted.  Change had arrived.

H and D have adjusted swimmingly; their shoes are tucked away as intended.   The problem now seems to be that I can’t get used to the new system.  I keep leaving my shoes by the doors to the kitchen and basement.  I have received two tickets from the Home Improvement and Neatness Patrol for illegal shoe deposit.  I’m going to have to get with the program.  I can’t be responsible for the failure of shoe storage; I want that gift to keep on giving. 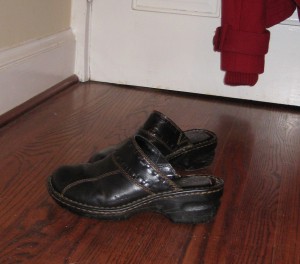 My shoes, conspicuously all alone.  I resolve to do better!