Near the top of my miscellaneous middle school mementos was a stationery box containing several small notebooks I used as journals. My account of seventh grade begins on a cheap note pad shaped like a tulip and continues on others, equally makeshift. These messy little chronicles carried me back across the years, with jottings concerning such experiences and events as these:

I find it reassuring that my journals confirm the accuracy of many middle school memories. I really do know what it’s like to be thirteen. This should qualify me as a wise and valuable advisor to the young teens of today, right? Even though when I was thirteen, computers were the size of a house, and there was no such thing as the Internet, a cell phone, texting, Facebook or Twitter?  I’m hoping my daughter thinks so. 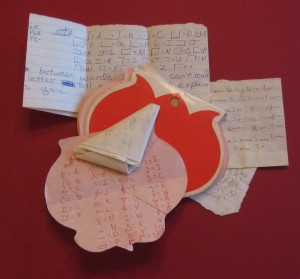 Do you have middle school memories that beg to be shared?
Tell me about your odd ones, your funny ones, your unforgettable ones!