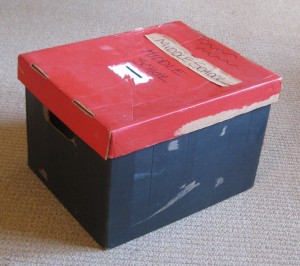 The fragility of memory has always bothered me. Even as a child, I hated that many experiences were already lost. During Atlanta’s mild February days, my parents would reminisce about the lovely white winters in Kentucky. Don’t you remember the huge snowman we made when you were three? No, I didn’t remember, and it angered me. Just as it angered me that my Georgia friends and I were so snow-deprived that the slightest dusting of powder, or more typically, ice, sent us outside in deliriously futile attempts at snow-related activities. The sled would get mired in leaves and mud, the smallest snowball was elusive. We would return inside wet, cold and grumpy. I had spent my babyhood in a winter wonderland, without a single memory to show for it. The old photo of me in a snowsuit stirs no wayward recollection. It seemed terribly unfair.

Partly in an effort to make up for the transience of memory, and partly because I have a strong thread of OCD, I save the stuff that declares I was there. My parents’ attic was once filled with boxes of papers attesting to my life’s various stages. There are letters, artwork, class papers, books, school information, playbills, calendars with notes of daily activities, and much more. Although I realize the line is fine, I’m not a hoarder. Not every scrap of my past made the cut; much has been thrown away or recycled over the years (sometimes, I admit, reluctantly). My collections are organized, to a degree.

Now that I live in a house with storage space, on every drive up from Atlanta, my parents bring along one or two of those memory-filled boxes. They are determined, little by little, to win back some space in their home, while mine becomes more cluttered. This Christmas, a battered file box labeled Middle School arrived with them. Its timing was perfect. It offered a window onto my early teen years, when I was my daughter’s age. And it proves that my memory is not altogether unreliable.

My seventh grade year coincided with the desegregation of the Atlanta Public Schools. This was accomplished, I am glad to say, without the riotous tumult that occurred in certain cities (not all of them southern—Boston comes to mind). The perceived threat of greater diversity prompted a few families to flee our in-town neighborhood for distant suburbs. But we would stay the course, as would most of my friends. This was no time to pull up roots so recently planted, roots that were just beginning to flourish. We believed in equal rights for all people, and we were in this together.

We were bused to a newly created middle school adjacent to the Georgia Tech campus. Previously a high school, it was a massive, rambling, red brick structure built in 1922. Impressive, yet down-at-the-heels, it would have made a spectacularly atmospheric haunted house. I can see it as the architectural star of American Horror Story: Schoolhouse.  Even now I have the occasional eerie dream that I’m lost in the shadowy recesses of the sub-basement, or peering out from a broken window in a third-floor classroom. If the details are vague, the spirit of the place remains very much alive in my mind.

The life that teemed within the walls was equally unique. The school brought together a diverse young population. We spanned every spectrum. There were kids from the grand old homes of Ansley Park, from Techwood Homes, the country’s first public housing project, and from every Atlanta neighborhood in between. All of the major ethnic groups were represented, as were many of the more obscure ones. For most of us, it was the first time we were outside our own comfortably familiar environment. For all of us, it was an adventure. A nearly unforgettable one, as my memorabilia box confirms.