In Lenten seasons past, I have denied myself some treat that I take for granted. Or I haven’t, and I’ve felt guilty about it. Either way, the result was less than inspiring.

One year, I avoided all desserts, including chocolate, ice cream, cake and candy. I stood firm in my abstemiousness. My Lenten sacrifice was technically a success, and perhaps it was worthwhile. It showed me that I do possess a measure of self-control. But spiritually, there was no real gain. Looking back, I see that I was at times a sanctimonious kill-joy. My husband’s family came for a visit, and I made a beautiful cake. But I didn’t eat a single bite, and I let it be obvious that I wasn’t eating. This, no doubt, did nothing for my own or anyone else’s spiritual edification.

Another year I tried to turn Lent into a diet. I may have lost a few pounds; I can’t even remember. Possibly I became lighter, but no more enlightened. It was during this time that I realized Sundays were not included in Lent. This prompted me to overindulge every Sunday, making Monday’s austerity even harder to face.

This year I’m not giving up a specific treat. Instead, my goal is to observe a mindful Lent. There is much talk these days of the benefits of mindful eating, a Buddhist-inspired practice whereby in savoring a single almond or three raisins for a half hour, we discover a more abiding pleasure in food. I will not go to this extreme, but I will try to be far less mindless in my eating. On most days, at least, I will count out my twelve cancer-fighting cashews (recommended by Dr. Oz), instead of grazing thoughtlessly from the container. And on all days, I will try to be thankful for the bounty of nourishment that is within our easy grasp. I will cook healthy meals for my family, and consume in moderation.

I will try to be mindful not only in eating, but in living. The Biblical basis of Lent is the forty-day period of prayer and preparation that Christ spent in the wilderness before beginning his ministry. Remarkably, he fasted the entire time, and even in his physically weakened state, he resisted repeated temptations by Satan. That forty-day fast was certainly a serious endeavor, so much so that it tends to make us forget about its greater purpose. We trivialize Lent when we turn it into an exercise of nothing more than our willpower over food. Christ’s forgoing of food was not the point; it was one aspect of spiritual preparation, of renewing his connection with the Father in order to be effective in his ministry.

After the example of Jesus, Christians are encouraged to strengthen their ties to God during the six weeks before Easter. By following a more disciplined program of Bible study, prayer, introspection, good works and moderate or sparing consumption, we are better equipped to fully appreciate the power and the glory of the resurrection.

Maybe I’m taking the easy way out this Lent. It’s true that I hate the thought of giving up chocolate, for example, when we have Russell Stover’s candy remaining from Valentine’s Day. (I also hate waste.) But simply giving up on a certain food hasn’t helped me recharge my spiritual battery in the past. Instead, my goal will be to live each day of Lent mindfully, prayerfully, and humbly. I probably won’t succeed every day, but I will keep my sights on the brilliant blessing of Easter that awaits. This will give me a fighting chance. 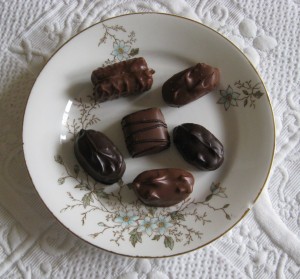 Not off-limits for me this Lent, but to be savored (mindfully)!