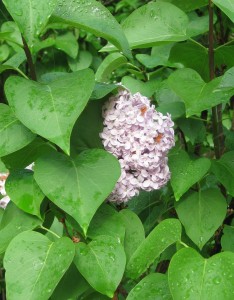 In the early spring of the first year we spent in our house, I noticed green buds emerging from the gray branches of the tall shrub by the front walk. I had wondered about the identity of this large and leggy plant. When I looked closely, I saw the beginnings of lilac leaves. Our new old house was blessed not only by eminent silver maples, but also by a mature, substantial lilac bush. This realization brought me a jolt of happiness more typically associated with an unexpected gift, such as one that arrives in a pale blue Tiffany box. Lilacs have a special place in my heart. Like the maples, they speak of home and loved ones.

Lilacs grew in great abundance around my grandparents’ house, the locus of my earliest and happiest childhood memories. Lilacs surrounded the area in front of the smokehouse and adjacent to the chicken lot. They created a leafy enchanted shelter, a cozy enclave where I liked to play with my grandmother’s kittens.

Atlanta is generally too hot for lilacs. I missed them, growing up in Georgia. For me, the lilac became a symbol of a time long past, alive only in memory and never to be repeated. I didn’t expect to live among lilacs again.

Then I moved to New Jersey, where lilacs, like peonies, thrive. My walks into Rocky Hill took me past a ramshackle former church in the center of town. Built in 1870 as a Methodist Episcopal church, by the early 20th century the building was known as Lyric Hall and used as a community theatre and concert space. I knew the place as the home of a dear friend with the unlikely, romance-novel-worthy name of June Bliss. For many years, June was the warm and capable administrator at the center of the art history department at Princeton University. To anxious grad students she was a calm and motherly presence.  To professors preoccupied with the esoteric details of research, she was a grounding force.

Lyric Hall became June’s home in the early 1970s. She rented out the old sanctuary as a warehouse and lived in a warren-like apartment that had been added to the back of the building in the 1940s. June’s girlhood home was a magnificent Gothic revival house near Princeton, where her sister continued to reside. It baffled me that after growing up in such an architectural gem, she was content with her quirky, cramped apartment. I always imagined how the church could be renovated into a striking, spacious, light-filled home. June probably could have easily afforded such a project, but she wasn’t interested. She was thoroughly without pretense, and her unusual living quarters suited her just fine. I think she enjoyed the surprise in the eyes of first-time visitors’ to her decidedly eccentric home.

The old church was set on an expansive piece of property that adjoined what had once been the town green. June had a large garden in the side yard, bounded by a towering hedge of lilacs. She was generous with her bounty of vegetables and flowers. She encouraged me to cut as many lilacs as I wished, which I gladly did, usually under the watchful eye of the neighbor’s hulking pot-bellied pig. Every spring, thanks to June, our apartment was filled with bouquets of lilacs, in addition to the peonies I bought down the road. On a return visit after H and I had married and moved south, June dug up forget-me-nots from her garden to send back with us.  I planted them behind our townhouse, where they are probably blooming still.

June was a cheerful person with a lively sense of humor and a keen appreciation for irony. She retained her sunny disposition in the face of the cancer that afflicted her for a number of years before finally claiming her life. I remember very clearly the warm summer day I went to the mailbox and found the kind note from June’s daughter that broke the news of her mother’s death.  D was very young at the time, and we had been playing in the yard together.  Seeing my sudden tears, she dashed over to comfort me.  Our lilac bush serves as a reminder that departed friends, as well as the essence of home and family, remain with us always.

This spring, though, I was dismayed that only one small lilac bloom appeared. For several years now, blossoms have emerged only at the very top-most branches.  June’s vigorous lilac hedge, in contrast, bloomed profusely, from bottom to top, for decades. When I asked if she had a gardener’s secret, she laughed and replied that she simply appreciated the plants and left them alone.  Our lilac evidently needs something more than admiration.  I’ve read that an aggressive pruning can reinvigorate an old lilac plant. We will get the shears out this weekend and go to work.

I recently discovered that upon June’s death, her home was donated to the New Jersey Historic Trust. The Trust sold it, with a preservation easement, to an architectural firm that restored the building to its original appearance and now uses it as their headquarters. The gray asbestos siding was removed, the original white clapboard restored and repainted. The arched windows were elongated to their full height and the sanctuary space’s soaring ceilings were restored. June’s old apartment was replaced with a bright and much larger one.

It’s remarkable to me that even though June didn’t care to restore Lyric Hall for use as her own home, she made it possible that others, later, could enjoy the beauty of the renewed historic building. It gives me hope for the rehabilitation of our tired lilac bush.  Lyric Hall flourishes again, a fitting memorial to its former owner, and I’m convinced our lilacs can, too. 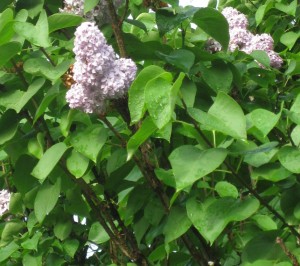 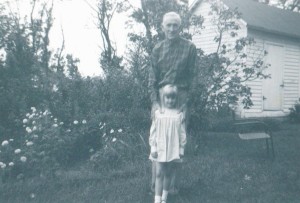 My grandfather and me, with lilacs behind us.