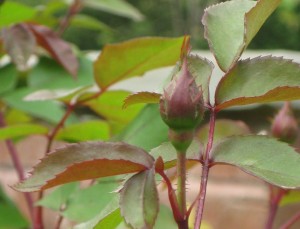 Our back yard, when we first moved into our house, was not really a yard at all.  It was a rather dismal expanse of cracked concrete.  The previous owner was the developer who built the neighborhood in the 1970s.  He used the large detached garage to store heavy machinery.  There was a small back porch, to which a wooden wheelchair ramp had been added during the last years of the owner’s life.  The only greenery was an enormous blue spruce that hid the oil tank and sheltered many bird families.

To my husband, the back of the house and its surrounding concrete pad resembled an old gas station.  From the very beginning, he saw it as something that cried out for major changes.  I wasn’t as harsh a judge.  While the area wasn’t pretty, certainly, I saw a convenient play area for our daughter, a place for hopscotch and exuberant chalk drawings.  I envisioned it busy with various toddler vehicles, followed later by a tricycle and a bicycle.

The ramp was ugly, but it served an immediate purpose.  Our daughter fought sleep with great vehemence, but motion made her sleepy.  She often nodded off in the big Graaco stroller if I walked long enough.  When I pushed her very carefully up the incline, she might continue sleeping.  I could park her on the porch while I sat at the outdoor table and snacked or read.

Our concrete yard also functioned well for several years.  It was a busy highway for a variety of wheeled contraptions, an ideal spot for the wading pool.  We bounced basketballs and hit tennis balls off the garage.  Chalk masterpieces were created and washed away by the rain.  And then one day, we no longer needed all that pavement.  We began to imagine what the space could be.  We had a very blank slate. 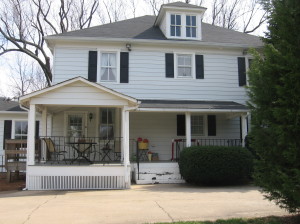 The back of the house, before the re-do. 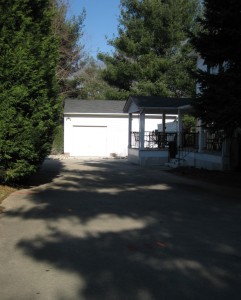 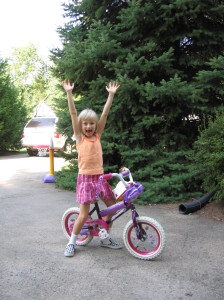 Unfettered by training wheels, our daughter exults.  She put many miles on her first little bike without leaving the back yard.

It took us at least two more years of debate and procrastination before we began our big back yard project.  There followed months of demolition, construction and innumerable, inevitable delays.  Afterwards, we were left with a roomy sceened porch, flagstone courtyard, and a more attractive garage.  There is a little grassy area for Kiko.  An old-fashioned wrought-iron fence encloses it all.  Unlike the front yard, which is heavily shaded by the big silver maples, the back is an oasis of bright sunlight.  Where the concrete once baked white-hot,  we now have a profusion of flowering plants.  The red double knock-out roses quickly formed a dense hedge along the fence, and the pale pink climbing roses heartily embraced the garage trellis.  From May to September, we are surrounded by a riot of roses and other flowers.  For those who came by a lovely back yard easily, this might be no big deal.  As for us, we still find it hard to believe that all that concrete gave way to such life and beauty. 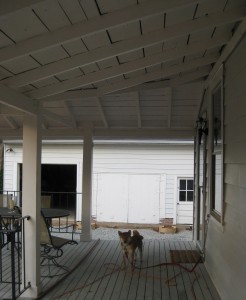 The re-do begins, and things look worse before they began to look better. Kiko doesn’t care, though. 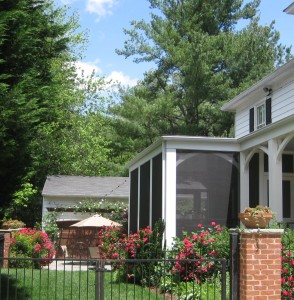 Our back yard and new porch, after the re-do. 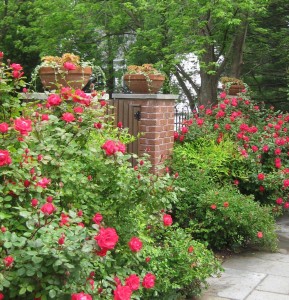 Double knock-out roses along the fence. 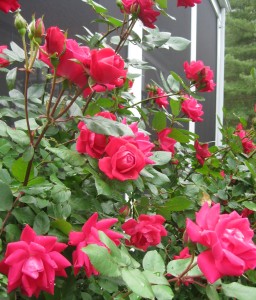 More knock-outs by the screened porch. 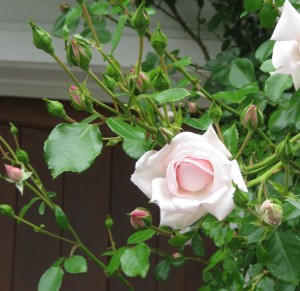 Pale pink roses climb the trellis on the garage. 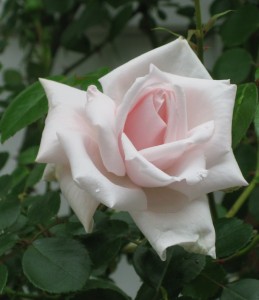 Just one of many perfect roses, within easy reach.