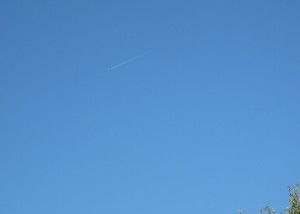 The weather is beautiful today here in northern Virginia.  The sky is clear and blue, the sun is bright, and the crisp, fresh promise of fall is in the air.  Eleven years ago, September 11 began just as gloriously.  We had no idea what was coming.

This morning, as I typically do on every September 11 since 2002, I find myself keeping an eye on the clock as 8:46 approaches.  Anything I might say about my memory of that day runs the risk of sounding trite or self-important, so I won’t attempt it.  All I can do is offer my prayer, in hopes that its power will be magnified as it joins and rises with the great cloud of kindred prayers around it.

On this September 11, I ask for God’s blessings on all those whose lives were irrevocably and tragically altered on that terrible day.  For the thousands who died, and for the many more loved ones who grieve for them.  For the children who grew up without a parent, for the spouses whose partners never returned, for the grandparents who became parents to their lost children’s children.  For those whose pain still pierces, and for those who suffer guilt because some healing has taken place, because cherished memories have dimmed.

I give thanks for the many heroes who sacrificed their lives or endangered their health on that day to save strangers.  For the firefighters, police and rescue workers who bravely answered the call to duty.  For unlikely individuals, like the passengers of United Airlines Flight 93, who rose to the daunting challenge.

I give thanks for the unity we feel as a nation each year on September 11.  I pray that it might outlast this one day.  In the poisonous political atmosphere of this election year, may it inspire us to set aside our bitterness, for a while, at least, so that we might work together.

And, most of all, I thank God for the good that always comes from bad, even if, in our sorrow and anger, we may not see it until months or years later.

May we be especially receptive to the vitality of God’s blessings on this September 11.  I pray that we will feel God’s mercy and love descending on us all, from out of the blue.