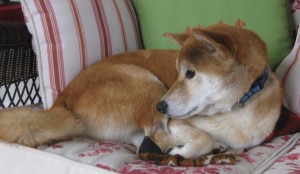 One morning last week, when the sky was still dark, we were awakened by a sound we hadn’t heard in several months: loud, rumbling thunder.  Kiko had been asleep on the floor between my bed and his.  As I expected, he was sitting up, looking around uneasily.  I could read his little doggie mind:  Oh nooooo!  Is that what I think it is?  The terrible monster is back!  It didn’t die!  Where is it?  Will I see it this time?

Kiko has only one real fear.  In the presence of snarling, threatening, enormous dogs, he holds his head up, cool and composed.  He has never met a person who frightened him, although he barks with some alarm at those who insist on wearing large, unflattering shoes with shorts.  As a puppy, he was afraid of garbage trucks and wheeled trash bins, but now they do not phase him.  Thunder, however, is another story.

That morning, he quickly vanished from my room. When he returned a while later and jumped up in bed with me, his fur was wet in spots. Strange, I thought.

At the slightest suggestion of thunder, Kiko begins a frantic, unsatisfying routine.  First he searches for visible signs of the approaching menace.  He stares intently at the windows and darts from door to door.  He recognizes flashes of light as extremely bad omens, likewise the appearance and sound of rain.  Once his worst fears are confirmed, he seeks a better place.  Unfortunately, there is no better place.  He attempts to maneuver himself into confined spaces:  closets, under desks, behind arm chairs, even behind the toilet or in the angle of the open refrigerator door.  Once, when we had removed the kitchen trash bin from its cabinet, he sought refuge there.  But no place is ever safe enough.  He is soon on to the next spot.

If all this fails to console, and it always fails, his last resort is physical closeness with one of the pack.  As I’ve mentioned before, if all is well, Kiko doesn’t need to be in your lap, or in your face (he’s not a kisser, unless you’ve just eaten cheese).  While very social when we’re out walking, at home he prefers solitude and the freedom to enjoy a variety of spots for unencumbered relaxation and sleep.  He’d rather you not disturb his rest by joining him on the sofa.  He may begin the night downstairs in the playroom.  Toward morning, I may find him sleeping in his bed in the corner of my room.  Occasionally he stretches out on the foot of my bed, but he never remains there long.

Only thunder prompts him to get close, and then he can’t get close enough.  Usually he is too nervous to sit or lie down. If he catches you off guard, he may try to stand on you, perhaps on your chest or neck.  This is extremely unpleasant for everyone involved.  Or he tries to sit on your pillow, which I will not allow.  Wrapping him in a towel or the bedspread offers some solace.  I considered buying a Thundercoat, but those I’ve seen appear to be hot and heavy.  He’s already panting excessively; I could imagine a thick Thundercoat leading to spontaneous combustion.

As I readied breakfast  for our daughter that day, Kiko stuck by me like glue,  huddling in the space between my legs and the kitchen cabinets.  When I opened the dishwasher, he considered getting in it.  The thunder continued, so I turned to the only remedy that verges on effective:  Xanax.  Prescribed by the vet, it takes the edge off, so he is less distraught.  It allows him to cease roaming, lie down and minimize the panting and shaking.

When H appeared for breakfast, I asked if he knew why Kiko’s fur had been wet.  He did.  When Kiko had left me, H had been in the shower. Frenzied desperation seems to endow our dog with a near-magical power to open any door.  Suddenly, there he was, in the shower with H, trying to dodge the drops.  This was a first, even for our weird little dog.  He hates getting wet nearly as much as he hates thunder. When he realized  there was no escaping the water, he began pawing at the shower door.  Once released, he dashed upstairs to find me.

Nothing else had worked.  He had abandoned all dignity and was prepared to snuggle.  I had been expecting him, so he he missed the chance to stand on my throat.

One thought on “Evading the Terrible Thunder Monster”