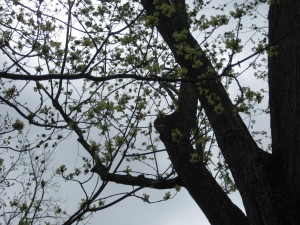 It’s happened again.  Another harrowing national tragedy.   This time in Boston, during that city’s much-beloved marathon, on Massachusetts’ annual Patriot’s Day, a day of holiday and celebration.

More innocent lives were lost yesterday, April 15.  More bodies were maimed, more souls damaged, more children left without a parent, more parents’ lives ravaged by the loss of a child.  Another beautiful day in April, forever marked by catastrophe and sadness.  Today is the six-year anniversary of the Virginia Tech shooting.  This Friday, 18 years will have passed since the Oklahoma City bombing.  As in the 1996 bombing at the Atlanta Olympics, a jubilant time in the life of a city has been twisted into ugliness, a blood-red-letter day of mourning.  As in December’s horrific mass shooting in Newtown, Connecticut, children are among the victims.  As on all these days and on September 11, those of us still standing are shakier, less steady.

Perhaps somewhat guiltily, we are relieved that it wasn’t our time.  Not yet, at least.  But we know it could easily have been us.  It could happen to any of us.  And increasingly often, it does.  Our family was concerned, in particular, about friends from our church.  The daughter was running the marathon, and her parents were there to cheer her on.  Luckily, she is young, strong and very fast.  We learned through Facebook that the family was unhurt physically.

Now, as a nation, we will pause.  We will mourn.  Many of us will pray.  We may find ourselves at a loss for how to proceed.  But then, as we always do after such calamities, we will rally.  We will come together in love and support of those who died, of those runners now missing limbs, of those who have lost loved ones, of those who will assist friends and family as they face years of surgery and difficult recovery.  We will stand up and say that we refuse to get used to this.  We refuse to accept such violence as the natural order of things.  And through our shared strength and determination, we will show that no matter what, the power of goodness will win out over evil.  Immediate proof of this is demonstrated by the many people who stepped in, selflessly and heroically, to do everything they could to help injured strangers.

My prayers will continue to go out for all those impacted by this tragedy, and for all Bostonians, who, I would imagine, take personally this despicable strike against their hometown.