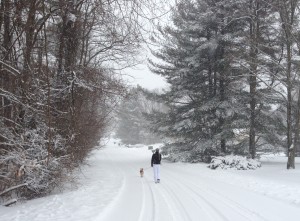 As I’ve said before, our dog Kiko doesn’t go in for expected over-the-top displays of doggy devotion.  This may be because, as a Shiba Inu, he believes he’s a cat.  The breed is known for its independence and regal aloofness.  Kiko likes his own space.  Once his needs are meet, he prefers undisturbed solitude.  When he decides it’s time for a walk or treats, he beams a persistent, focused stare in my direction.  This is a far cry from the loving, entreating gaze of a Golden Retriever.  It’s a willful obey-me-or-else eye lock.  And it works.   I toe the line, because the Shiba stubbornness is a force of nature.

If he’s been left alone for a while, Kiko usually ambles into the kitchen unhurriedly upon my return.  Exultant jumping and frenzied face licking are beneath his dignity.  After a sniff to determine where I’ve been, he sidesteps me to paw at the door so he can check out squirrel activity in the back yard.  As for close human contact, he’s warming up to it somewhat as he ages.  (He turns eight this August.)  Occasionally I can put him on the sofa with me and he’ll rest his head on my knee.  But it’s still generally true that he consents to cuddle only if he’s asleep or frightened.  He fears nothing but thunder and fireworks.  (See here and here).  We knew to expect this sort of temperament before Kiko joined our household.  Because simply looking at my little dog makes me smile, I’m content to take him on his own terms.  If I need to be gazed at devotedly, I can visit a neighbor’s Lab or Golden Retriever.  Or I can get that sweet look from Ziggy the Rhodesian Ridgeback, Kiko’s walking pal.

My daughter has learned to be less offended by the depths of Kiko’s reserve.  She still finds it annoying when she lies down beside him on the floor and he gets up and re-settles a couple of feet away.  But what may ignite her fiercest ire is his tendency to ignore her when she calls him for a walk.  Of course I’m the one who walks the dog most frequently.  He’s not sure D means business.  Sometimes, hearing her calling, he bypasses her to seek me out expectantly.  Typically, by the time she’s out of the house with Kiko on the leash, my daughter is furious and the dog is confused.  I’m not very happy, either, although I’m relieved to see them leave.

During the recent snow days she took him into the woods several times.  A meandering, exploratory woods walk, whatever the weather, is one of Kiko’s favorite activities.  He was starting to hop up quickly at the first sound of her invitation.  One afternoon when D got a chance to meet friends for sledding, she realized there wouldn’t be time for a woods walk.  I wasn’t up for wading through the deep snow, so Kiko and I would start off with D and then continue on our regular neighborhood walk.

The three of us set off together.  All was fine until the point at which D veered off course toward her friend’s house.  Kiko couldn’t believe we weren’t joining her.  He tugged hard at the leash.  He stared at me.  Come ON! Why are we NOT GOING?   Where is SHE going?  I tried to persuade him to carry on with our walk.  He splayed his legs and ducked his head.  He wouldn’t budge.  He sat down. 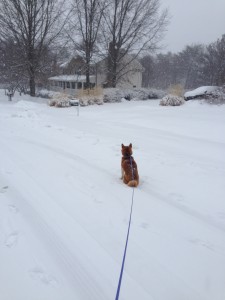 Surely she’ll come back.  I’ll wait right here in the middle of the frozen street. 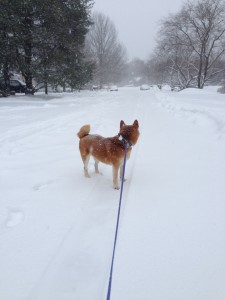 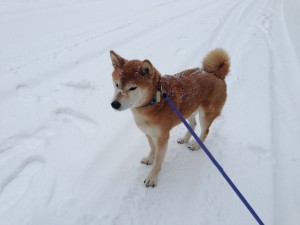 If I can’t go with her, we might as well head towards home.  But slowly. 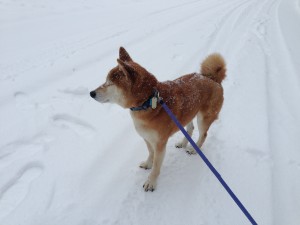 If I sleep in the road for a bit, maybe she’ll be here when I wake up. 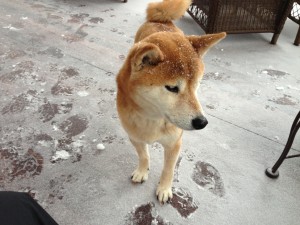 All the way back home, and still no sign of the girl.  So sad.

When my daughter returned that evening, I told her how her dog had so wanted to accompany her.  How he had waited, and wanted to keep waiting, there in the snow.  How that maybe, in his own narcissistic, catlike Shiba way, he does really love her. 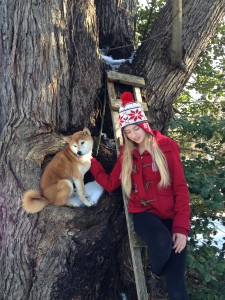 Further proof of Kiko’s devotion to D may be his willingness to remain placidly in the strange places she puts him, as in the knothole of this maple in our yard. 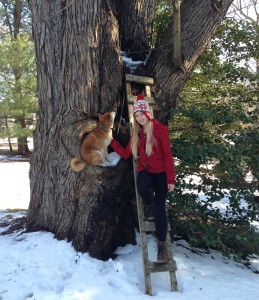