My daughter is an ardent devotee of Halloween.  Evidently that first freezing trip to the pumpkin patch at ten months didn’t turn her against the holiday or its decorative trappings.  (See Looking Back on our Little Pumpkin, October 2012.)  During her preschool and elementary school years, her Halloween costume got plenty of mileage.  Around the start of summer, she began the costume discussion:  What would she be this year?  Soon the Halloween catalogues, sent to us by my mother, would come pouring in.  Once Mama and I had put the finishing touches on the outfit, usually in early October, she was in it.  As so many children do, she wore it repeatedly throughout the entire Halloween season, to parties and on many other occasions. These kids must know that dressing as a witch or black cat alleviates the tedium of mundane outings such as grocery shopping and dental visits.

After Halloweens One and Two as a Jack-o’- Lantern, our daughter followed up with Black Cat, Witch, Gypsy and Ghost Bride.  This year, she will be dressing as Daisy from The Great Gatsby, and hitting the neighborhood with a couple of friends, who, like her, plan to persist in trick-or-treating as long as they can. 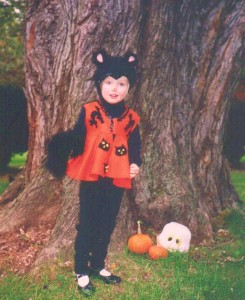 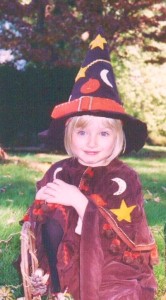 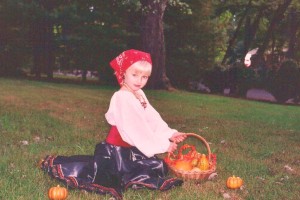