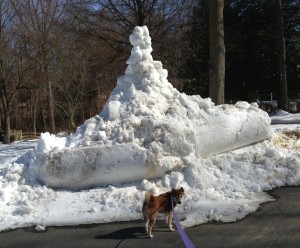 Last Wednesday’s snow remains very much with us. Every yard is still an expanse of white.  Our old maples appear far shorter, due to the snow banked high on their trunks.  Snow plows created towering fortresses at every intersection. Roads are bordered by messy, jagged ridges that grow more discolored every day, yet never seem to diminish in size.  Parking lots are dotted with miniature mountains.

Days of bright sunshine combined with frigid temperatures created an icy top layer that sealed in the snow below.  The squirrels, whose zest for life appears boundless, chase each other playfully across it.  Kiko is less enthusiastic.  He investigates the snow piles tentatively, placing each paw carefully to see if the surface will hold.  He is clearly irked when  a leg or two plunges through the crust and leaves him in an awkward position, his dignity compromised.  The shaded sections of our driveway are still thickly coated with ice, making a short trip to the car a dangerous business.  We weren’t able to fit in our mid-winter visit to my husband’s family in Rochester this year, but the landscape of upstate New York appears to surround us.

The predicted warming spell has arrived, yet it has had little effect on our snow cover.   Two days ago, I saw a good omen.  I watched as Kiko picked his way delicately over the mounds of deep snow on our patio to reach his favorite sunny snoozing spot, newly uncovered. That night, however, brought another two inches of fresh powder.

Today we may finally see a change.  The temperature is expected to climb into the high 50s. As we finished our morning walk, a light rain began, and I was cheered at the prospect of some of the snow washing away.  I had barely completed the thought when I heard a long, loud, slow rumble of thunder.  Kiko heard it, too.  Oh no!   That meanie’s back!  (See Evading the Terrible Thunder Monster, April 2013.)  He began to pace nervously, circling the house several times before allowing me to wrap him tightly  in his thundershirt. The daily inconvenience of the snow had me dreaming of spring.  But I’d forgotten that with it comes, for my dog, the nightmare of thunderstorms.  Maybe it would be best that the winter cold continue for a while, snow or no snow. 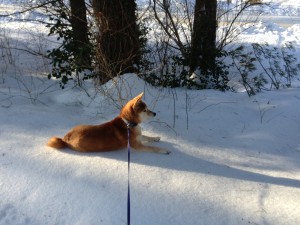 Kiko reclines atop the snow, eyeing the street for approaching friends.