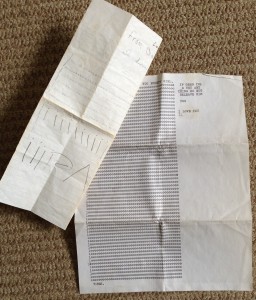 I saved two more notes from my third grade year.  These took an entirely different approach.  One was typed on good-quality paper.  An all-caps heading reads:

I LOVE YOU  YOU PREETY GIRL.

Immediately below the heading are 59 lines that look like this:

At the bottom of the page, again in all-caps is one word:

Near the top of the page on the otherwise blank right side is this message:

IF GREG TOL
D YOU ANY
THING DO NOT
BELEAVE HIM

I found this note impressive then, just as I do now.  I’m impressed at the time and effort needed to type so many lines of zeros.  I’m impressed at the absence of mistakes–only one typo in the numbers.  Quite a lot of work went into it, especially for a little third-grader.  And I’m touched by its rather odd tack.  For an elementary school love note, it falls far from the realm of the expected.  I like that very much.

Interestingly, the note has no signature.  I had always assumed it was from Danny.  When I asked him if he remembered creating the typed masterpiece, it didn’t ring a bell. Once he saw a photo of the note, a long-forgotten memory began to crystalize.  He could see his young self in his mother’s office,  experimenting with her new high-powered typewriter.

As for the cryptic reference to Greg, and what he may have told me–the message I shouldn’t believe–Dan can’t recall.  Greg couldn’t shed any light on that matter, either.  As in the earlier note, he can’t remember having been involved. 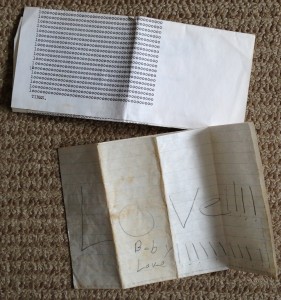 The third note is handwritten in pencil on notebook paper.  It follows the same numerical theme.  Perhaps it was a precursor to the typed note, a sort of rough draft. The numbers appear on the top half of the page, below the words I love You, written in cursive.  Also at the top, printed in what appears to be a different hand, are these words: Look on Back  and from Danny.

The entire bottom half of the page is taken up with the following message, printed in huge letters:

This handwritten note, both Dan and I have come to agree, must represent a combined effort.  I can imagine Danny showing his half-finished letter to a friend, perhaps the omnipresent but forgetful Greg, or someone else.  That boy grabbed the note playfully and wrote the emphatic Love Baby Love message on the blank lower half of the page.  Like the Kiss me after school demand on the earlier note, it’s completely out of character for shy Danny.  Then, for good measure, the second boy wrote in Danny’s name, but used printed letters instead of Danny’s typically careful cursive.

Such a scenario fits in with my recollections of elementary school.  I’m fairly certain I never wrote any love notes during these years, and I know that if I had, I would not have signed my name.  But I’m very familiar with a similar type of conspiratorial collaboration, the back of forth of who likes whom, the ongoing gossip concerning which boys were cute, which ones were funny, which ones were worth our daydreams.  In those old days, the real fun of “liking someone” had very little to do with an actual boy.  Instead, for my friends and me, it simply offered hours of amusing conversation, a pleasant distraction from schoolwork and our childhood responsibilities.  I  assume it was no different for the boys.  I’m not kidding myself that these notes offer proof of true young love.  But at the very least, they suggest that my name was among those discussed, on occasion, by the third grade boys.  I was noticed.  I was not invisible.  And maybe I wasn’t considered entirely crazy.  Thank you, Dan.  After all these years, your efforts and creativity are more appreciated than ever.

For kids today, I have this piece of advice.  If, in this age of texting, Snapchat and Instagram, you’re lucky enough to receive an old-fashioned paper love note, save it.  If it doesn’t bring you happiness now, just wait a few decades.