As we wandered the Latin Quarter behind the Pantheon along the narrow streets of the rue Mouffetard area this past April, we were stopped by several delicately painted street art murals.  The three paintings include the same figure of a young boy wearing a pale blue and white striped hoodie, jeans and Converse sneakers.  This is street art at its playful, charming, arresting best.  Not only does it improve the blank walls it adorns, it prompts passers-by to pause, think, and look more closely. 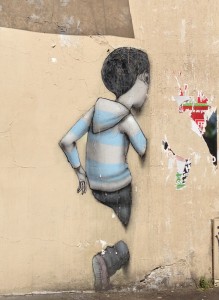 An internet search after I returned home revealed these three murals to be the work of Julien Malland, who paints under the name “Seth.”  Also known as the “Globe Painter,” he has created many other works throughout Paris and all over the world.  The figure of the boy appears repeatedly, as does the pony-tail-wearing girl in the example below.  The artist often uses the wall surface as a unique element in the design.  In the painting above, the boy appears to be in the process of disappearing into the wall.  In another Paris mural, entitled “Painting the Rainbow,” the boy seems to lift up the wall like a canvas curtain in order to paint a circular rainbow on the floor below.  In other works, the wall surface plays the role of water, from which the boy and girl emerge as they prepare to launch a paper boat. 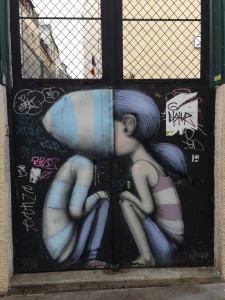 Above, secrets are shared under cover of the roomy striped hoodie. 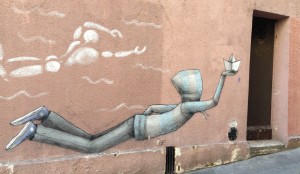 In this work, the boy appears to float in the water of the wall, holding his paper boat aloft. Some of Seth’s Paris works occupy entire sides of multiple-story buildings.

This artist’s appealing, whimsical creations remind us that Paris is, indeed, one rambling, open-air gallery in which art of every genre is free for those willing to take the time to look.