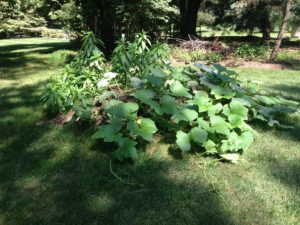 For the second year in a row, the maple stump compost pile in our yard has become home to an unplanned pumpkin patch.  (Regarding last year’s patch, see here.)  In early summer, dark green leafy vines began to appear.   Each day they covered more ground, sending out wiry, pale green tendrils that grabbed hold and anchored firmly to blades of grass.  Bright yellow blossoms began to sprout from long, thin shoots on some of the vines. 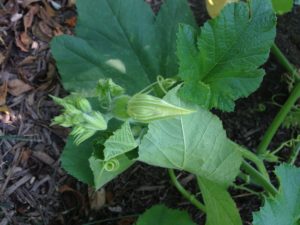 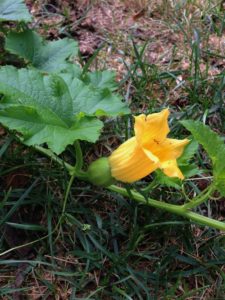 Other vines near the ground began to form tiny green bulbs topped by buds that then developed into blossoms.  As I discovered last year, these are the female blossoms that bear fruit if pollinated by bees.  The blooms attached to thinner, longer shoots,  like the one shown below, are male blossoms, and not destined for pumpkin-hood. 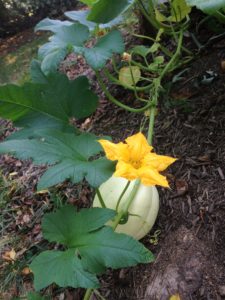 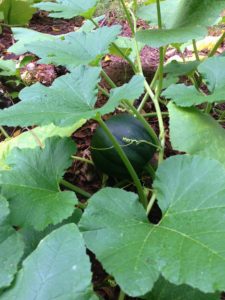 Like last year, two types of squash vines flourished in our patch.  Those bearing larger, dark green sharply tri-lobed leaves produced pale yellow pumpkins.  Those with somewhat smaller, lighter-colored leaves brought forth acorn squash, like the one shown above. 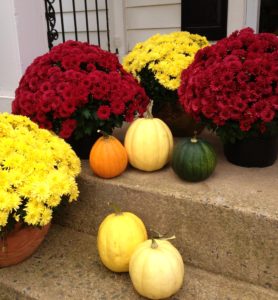 Deer and squirrels claimed some of the bounty, naturally.  Our fall harvest yielded three pretty pumpkins in shades of pale yellow, and two acorn squash.  One of these remained green.  The other turned almost entirely orange after picking. 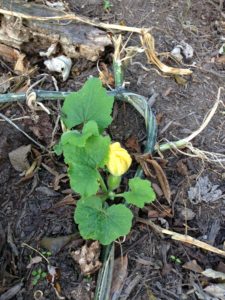 In recent weeks, as the vines became increasingly brown and dry, the deer seemed to find them more appetizing.  In short order, long after the last blossoms had withered, they nearly decimated the patch.  Every evening around dusk, they could be spotted gobbling determinedly at the bristly plants.

I thought our pumpkin patch was over and done for the season.  But this morning, in the chilly gray light of November, I noticed that one short section of vine remains green and leafy.  And one small proto-pumpkin was there, too, sprouting a bright, healthy flower.  The days are short, the weather has turned cold, yet the vine still bears fruit.   The perseverance of life, its push to endure despite the odds, never ceases to amaze me.