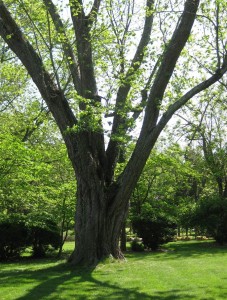 For the past two weeks or so, the seed pods have been falling from the big maple trees in our front yard. As the wind blows, they hit the roof with a sound like a shower of fat raindrops or forcibly hurled pea gravel. The tiny twirling helicopter blades drift slowly to the ground. Our daughter used to love to chase the flying seed pods. They gave my husband and me a welcome break from hands-on parenting. On warm weekend afternoons, we’d sit in cheap aluminum lawn chairs and watch her zigzag happily across the grass. We all still appreciate those spinning seed pods, despite the legion of tough little seedlings that spring up among the flower beds. We certainly love the trees that send them forth.

It was in the late fall, nearly eleven years ago, when we first saw our house. Most homes in our area date from the seventies through the nineties, and it stood out because of its age. Built in 1920, it was originally the center of a two-hundred acre farm. Unlike most northern Virginians, who apparently put a high value on new construction, I actively wanted an old house. I like the idea of a house with a past, with character, with some history behind it. Having watched my grandparents’ lovely old Victorian slip through our fingers, as well as the demolition of my grandmother’s birthplace, a far more historic dwelling, I wanted the chance to be a good steward of someone else’s family home.

I had all but lost hope of finding a livable old house, but suddenly we had stumbled upon one. It was a little shabby, and it had aluminum siding. But it was a genuine old farmhouse, a classic American four-square, with sizable rooms and a sensible floor plan. While it contained some dated 1970s touches, such as expanses of orange shag carpeting, it was solid and didn’t appear to need structural renovation.

And it had those wonderful trees, a semicircle of six huge trees that shaded the front yard. They were silver maples just like those that twisted their knobby roots through the soft grass at my grandparents’ house in Kentucky. Because it was late November, the branches were bare, but the shaggy gray-brown bark was as recognizable as the face of an old friend. This was the house! I was certain of it. The silver maples offered living proof.

Because my husband is a clear-headed man of business and science, he weighed all conditions carefully and made a low-ball offer on the house. I was anxious, nearly certain we wouldn’t get it, already formulating back-up plans.  Maybe that 1980s house (the one annoyingly referred to as an “executive colonial”) wasn’t so bad after all.  Or we could give up the search and spend another year in our rented townhouse.  But our daughter, a new walker, needed more space and a yard in which to roam.  I wanted an old house. I wanted the old house with the old maple trees. The one that just seemed like home.

Luckily, the prevailing local bias against older homes worked to our advantage. We managed to learn that our only serious competition was a developer whose goal was to tear down the house and build a bigger, newer one. Better yet, two. The owner, fortunately for us, much preferred that the house in which she had raised her children continue to be a family home.

During the following December, matters concerning our purchase took off on a wild roller coaster ride. There were complications with the contract, concerns about the foundation, the floors, the septic system, the furnace, the roof, the crazy property lines, and more. During our Christmas vacation with H’s family in Rochester, he was on the phone constantly with building inspectors and legal experts. But by early January, the house was ours. Our realtor, who had decades of experience, claimed that the closing was the most dizzyingly complex one she had ever witnessed.

That winter, while H worked especially late, I often sat by an upstairs window in a rocking chair, holding our year-old daughter.  As she nursed, or slept, smiled or cried, I looked out through the somewhat uneven glass at the dark blue shadows the big maples cast on the snow-covered ground. It sure was good to be home.  And it still is. 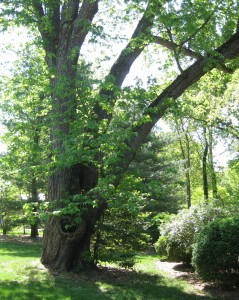 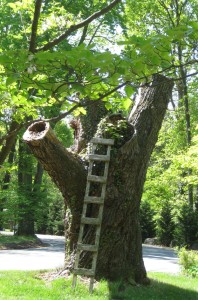 Silver maples are fast-growing trees with limited life spans.
We had to remove this tree’s branches when they became fragile
and hazardous to passing cars, but we left the trunk as a monument.  Our daughter occasionally uses it as a place of solitary refuge. 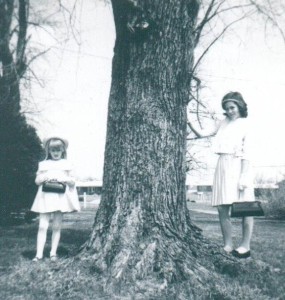 On an Easter Sunday in the 1960s, my friend Jeanie and me
beside one of the silver maples in my grandparents’ yard. 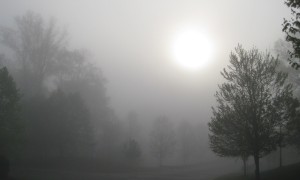 We woke up to a morning fog that reduced the spring colors
to black, white and shades of silver-gray. 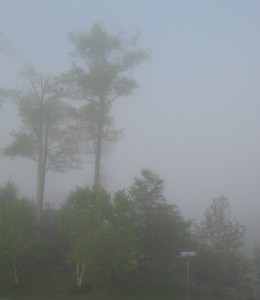 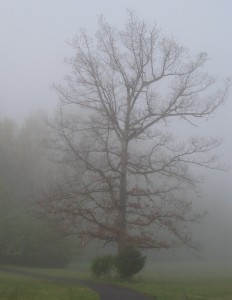 This oak is evidently in no hurry to welcome spring. 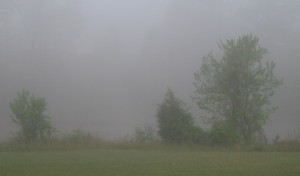 I can see the painter George Inness capturing this scene. 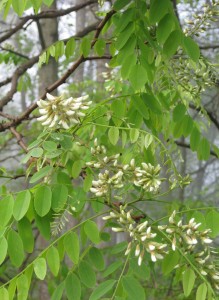 A locust tree beginning to flower. 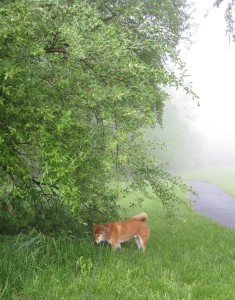 The dampness seems to heighten all the attractive smells.
Kiko had much to attend to this morning. 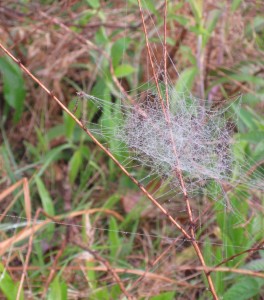 The scrubby foliage by the pond was dotted with dew-covered spider webs. 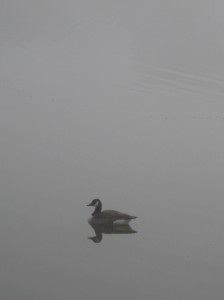 A lone mallard on the pond. 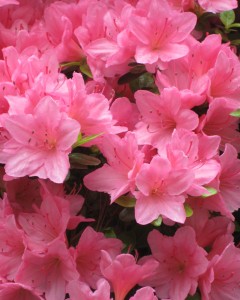 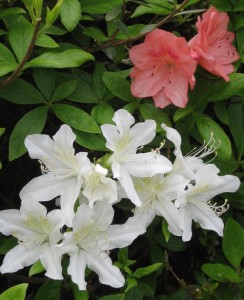 Our tree peonies, which could more accurately be called shrub peonies, began to bloom several days ago. Unlike the herbaceous varieties, the foliage does not die back each year. They bloom earlier, and the blossoms are larger, sometimes up to seven or eight inches in diameter. For sheer fabulousness, the tree peony blossom can hardly be surpassed.  It is, I believe, my favorite flower.

Peonies like a good cold winter, so they are rarely seen in Georgia. I first became acquainted with them when I lived in New Jersey, which apparently offers the perfect climate for the flower. As a house-sitting grad student, I brought in armfuls of peonies from the back garden and was then surprised to see the dining room crawling with ants. I learned to check for ants hiding in the profusion of petals.

After my husband and I were first married, we lived in an apartment on the outskirts of Princeton. Once the snow melted, I often walked the pleasant country road that led into the tiny, picturesque town of Rocky Hill. In front of one old farmhouse along the way sat a big stoneware urn filled in spring and summer with cut flowers for sale on the honor system. There was a hand-lettered sign and a battered metal box for the cash. The peonies were especially beautiful and bountiful, and our apartment was well supplied with the dramatic flowers. I loved living in a place where such trust was still possible. The peonies we now grow around our house in Virginia will always remind me of my rambling walks in sweet old Rocky Hill. 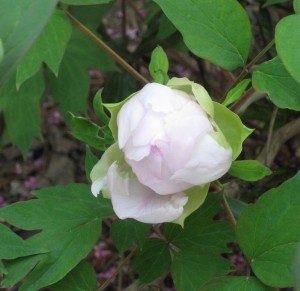 Our first tree peony bud of the season. 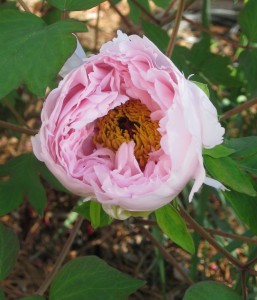 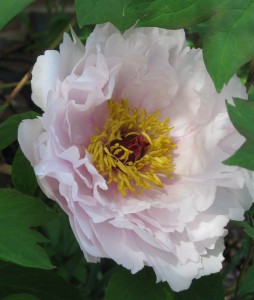 The full-blown blossom, lush and ornate. 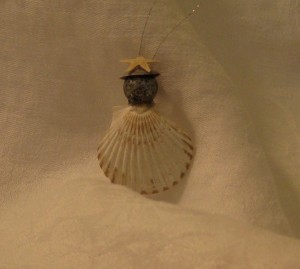 My husband’s family has vacationed in Cape Cod since he was a little boy. They cherish their time on the Cape. It’s a Family Tradition marked by capital letters and exclamation points. They will battle illness and adversity to reach the Cape. Fortunately, I appreciate the unique environment as much as they do. We began taking our daughter there when she was two. Her love of the Cape was immediate, as natural to her as breathing. H’s parents were immensely pleased with the discerning wisdom of their young granddaughter.

Our quaint little rental cottages look out across the bay to the Pilgrim Monument in Provincetown and the lighthouse at the tip of the Cape. We feel privileged to spend time each summer in this transitional, luminous, glorious spot. As in such magical places as Cornwall, Mont St. Michel and Key West, the expected balance of land and water has shifted. The land resembles a narrow ribbon drifting on the water. The sky is vast. The light is awe-inspiring, ever-changing.

The land itself is in constant flux. I was unprepared for the quiet drama of the bay. Growing up, my beach experiences were limited to the Gulf of Mexico and the Atlantic coasts of Georgia’s  islands. Both are beautiful areas, but they lack the sharply defined tidal contrasts of Cape Cod Bay. Every year without fail, soon after we arrive, a knock at our screen door signals Grandpa’s delivery of our copies of the tide chart, our guide to daily life. At low tide, the flats extend nearly as far as the eye can see. The shallows glimmer like silver in the shifting sunlight. When the tide begins to rush in, the change is at first almost imperceptible. Before long, though, the water is swirling around us, its determined, unstoppable force clearly evident. At least once every day, we watch as the expanses of sand shrink into islands, smaller and smaller, before they become completely submerged again.

The bay is not a prime beach for shelling, but occasionally it offers up its particular treasures. Every so often, during an especially low tide, scallop shells dot the flats like pale, muted jewels, their colors subtle and austere. Naturally, my daughter and I collect them. Over the years we had acquired several sand pails full before we discovered an ideal, simple way to transform the shells into appropriate mementos. With the addition of a few beads and smaller shells, they became Christmas angels. (Once again, the hot glue gun allowed us to turn out a host of ornaments quickly and easily.)

Our little angels keep Cape Cod with us during the off-season. The medieval pilgrimage connotations of the scallop shell give the angels a certain dignity and make them all the more evocative. One of the world’s first souvenirs, the scallop shell became the emblem of the pilgrimage to St. James of Compostela, the several routes of which stretch through the mountains of France to northern Spain. Tourism on a grand scale was born in these pilgrimage routes, and the Way of St. James continues to attract pilgrims, many still on foot. Medieval pilgrims were, to some degree, tourists, just as many of today’s tourists are, in a sense, pilgrims. For travelers of the eleventh or the twenty-first century, whether navigating the perils of wilderness paths or the trials of Interstate 95, the goals of the journey are similar and elemental: an escape from the daily routine, the promise of adventure, a firmer grasp of life’s real meaning, and the opportunity for spiritual renewal. I love it that such richness of meaning is tied up neatly in the humble shell angels on our Christmas tree. *

*One final, fitting point of interest: our scallop shells wash ashore near the place where our country’s first pilgrims landed. As most of us learned and later forgot, the Mayflower’s initial stop in the new world was in what is now Provincetown Harbour. 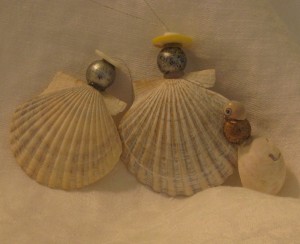 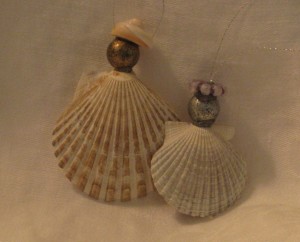 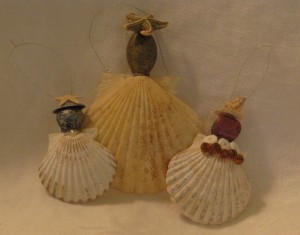 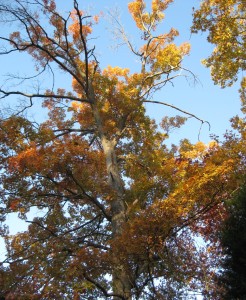 How good it is to walk in the morning sun again!  Last week when we were still plodding along blindly in the dark, Kiko paused and I didn’t notice (couldn’t see him, never think I really need a flashlight).  My shin hit his rock-hard head.  The blow didn’t phase him, but I found it painful enough to wonder momentarily if I had fractured my leg. Now that we’ve Fallen Back and said goodbye to Daylight Savings Time, it’s great to see where I’m going again.  The fall colors are especially brilliant here in Virginia, and we savor them all the more after the devastating rains of this past September. 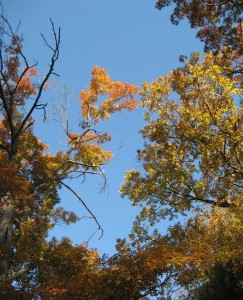 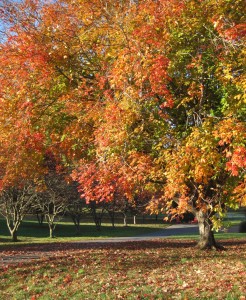 A bright November morning in Virginia.