Elvis the Cat was my friend Doug’s beloved companion.  Doug passed away almost two years ago, after a long, hard-fought battle with the rare disease syringomyelia.  (See Remembering Doug, February 2012.) During Doug’s last years, when his illness had deprived him of nearly all mobility, Elvis must have been an especially great comfort.  After Doug died, Elvis was there to offer love and support for Doug’s wife.  Now Elvis has gone on to his eternal reward.  He was eighteen years old.  Like Doug, he was a unique character.  Like Doug, he will be greatly missed.

During visits to my parents in Atlanta, my daughter and I enjoyed dropping in to talk with Doug, who never failed to entertain; his love of life remained robust no matter his level of discomfort.  If we lingered a while, we would usually be graced by Elvis’s regal presence.  He was reserved around all but immediate family, not one to dole out affection indiscriminately.  Elvis was especially wary of children.  As Doug advised D when she was a preschooler, Elvis didn’t appreciate loud voices and sudden movements.  She took this advice to heart, and it often paid off.  Elvis would first peer in from the hall, sizing us up with his cool yellow cat eyes.  Sometimes he decided we weren’t worth his time.  With a flip of his tail, he’d disappear.  Other times he gave us the OK and  approached tentatively, gracefully, on tip-toe.  D was delighted when he decided to settle in beside her, allowing her to stroke his abundantly fluffy black fur and hear his deep, growly purr.

Doug’s wife told my mother that although the house feels oddly empty, now that Elvis is no longer there, she has much to be thankful for.  She is grateful that Elvis was with Doug until the end, and that he stayed a while afterwards to offer solace as she began the process of adjusting to life without her husband.  Anyone lucky enough to be helped through a difficult time by the precious comfort of a pet must know the feeling.

Rest in peace, dear Elvis.  It was our good fortune to know you. 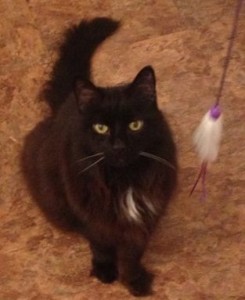 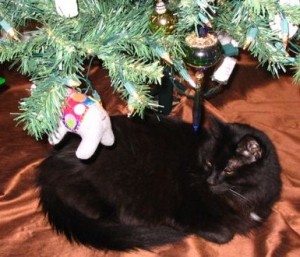 And beautifying the Christmas tree, 2012.