I was looking forward to showing my daughter Saint Paul’s Cathedral, which I’d studied repeatedly in various art history courses.  D was familiar with it from her preschool years when Mary Poppins was a revered staple in our video library.   In those days, I tended to remind her, too often, that the “Feed the Birds Church” was a real, famous, enormous church in London.  Sometimes I’d show her pictures of it in my architecture books.  And if my husband were in on the viewing, he’d explain how young Michael’s tuppence, used for bread crumbs for the birds, instead of deposited into Mr. Banks’ bank could, in theory, have caused a run on the bank.  No doubt D would have preferred fewer teachable moments while she watched her movie, but that’s a burden some only children must bear. 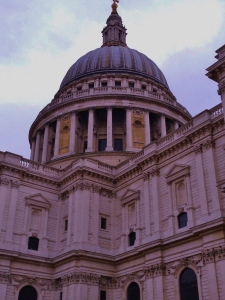 St. Paul’s stands atop Ludgate Hill, the highest point in London.  A church dedicated to St. Paul the Apostle and prolific New Testament author had existed on the spot since the sixth century.  The current church replaced a large medieval basilica built in the Romanesque and Gothic styles.  Like much of the City of London, it was destroyed in the Great Fire of 1666.  At the time of the fire, a young Christopher Wren had been involved in updating Old St. Paul’s.  A network of wooden scaffolding was in place as the stone walls were being repaired.  Had the scaffolding not caught fire and ignited the wooden roof beams, portions of the medieval church might have been salvageable.  After the destruction, Wren was hired to design a grand new cathedral.  Wren rebuilt over fifty London churches, but St. Paul’s is his crowning glory, a masterpiece of the English Baroque style. 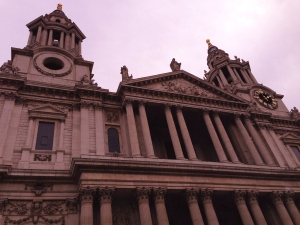 The highly sculptural west front of St. Paul’s, with its double temple front and twin towers. 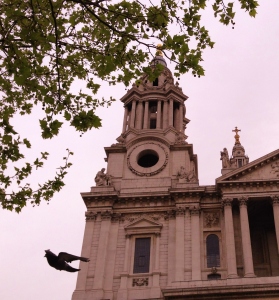 Feed the birds, tuppence a bag. 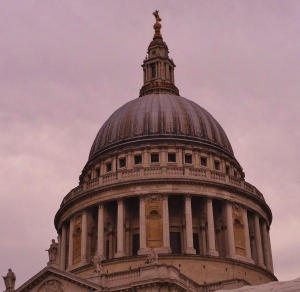 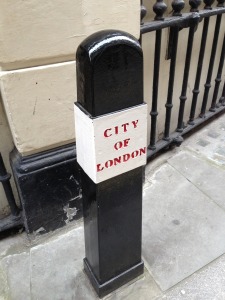 From its earliest days, St. Paul’s has been a distinctly urban church.  Considering its location in the densely crowded City, the heart of London’s commercial district since ancient times, it could hardly be otherwise.  Seventeenth-century images of Old St Paul’s show the hilltop basilica closely surrounded by haphazardly constructed smaller buildings.  The warren of wooden homes and shops that encroached upon one another made suppressing the four-day Great Fire particularly difficult.

That St. Paul’s continues to be hemmed in on all sides by ordinary office buildings is therefore not surprising.  But, I wonder, do they have to be so emphatically ugly and insinuatingly pushy?  A wave of fresh disappointment hits me every time I approach the great church from a street like the one pictured above. 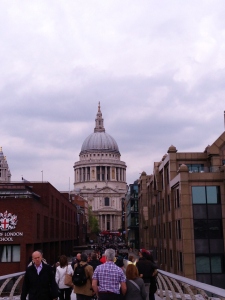 The British flair for the sweeping, spectacular vista is nowhere in evidence around St. Paul’s.  Above, a view from the Millennium bridge. 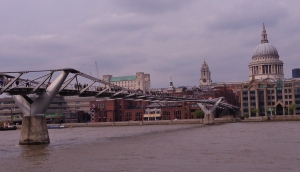 The Millennium Bridge and St. Paul’s from across the Thames. 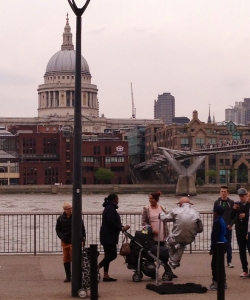 St. Paul’s looks down on the life of the city, as it has since its completion in 1708.  Above, in Bankside near the Tate Modern, a Shrek in a silver track suit amuses pedestrians by hovering in mid-air.  Despite the labyrinth of buildings that crowd the base of the Cathedral, the dome still towers well above newer, less distinguished neighbors.  Let futuristic skyscrapers such as “The Shard” and “The Gherkin” continue to pop up, as long as they don’t blot out the vision of that iconic dome.