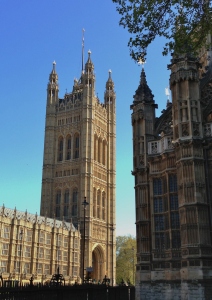 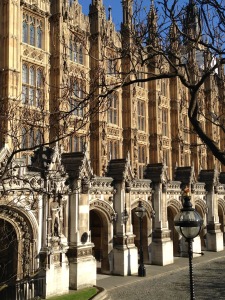 As we proceeded with our walk through the heart of London, I maintained my role as a somewhat muddled and conflicted tour guide.  It was with relief that I found the lacy, Gothic-style towers of Parliament and all the buildings of Westminster Palace in their expected spots, keeping watch over the Thames.  Their honey-colored stone gleamed warmly in the sunlight; I had never seen them looking so pristine.  The last traces of Industrial Revolution coal-dust grime were blasted away in 1994. 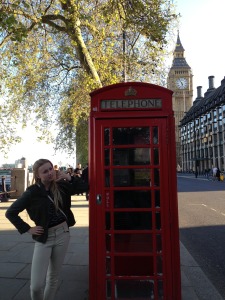 Although reduced in number and usage, classic examples of the red telephone box still punctuate the streets of London.  That they tend to be surrounded by international tourists snapping photos with their phones strikes me as an interesting irony,  further proof that our twenty-first century world is nothing if not meta. 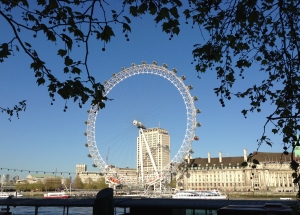 The ever-present London Eye grew larger as we made our way down the Victoria Embankment alongside the river.  Perhaps because I was distracted by the giant Ferris wheel, I completely missed one of my favorite London statues, that of the formidable Boadicea driving her chariot into battle against the Romans.  Back home, when I looked for her on Google maps, I found her exactly where she should have been, on the Embankment near Westminster Pier.  It was dismaying to realize I had walked blindly past the Warrior Queen. 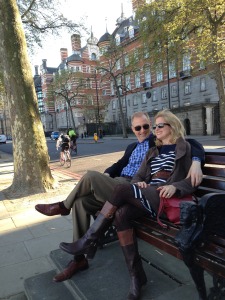 When we paused to rest on one of the Embankment’s sphinx-armed benches, our daughter noticed that our sunglasses reflected double rings of the London Eye.

When in London, one is gifted (or afflicted), with London eyes. 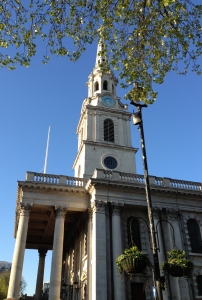 From the Embankment, we approached Trafalgar Square.  Since its completion in 1724, the neoclassical Church of Saint Martin-in-the Fields has anchored a corner of  the square.  James Gibbs’ design, with a tall, graceful steeple resembling a multi-layer wedding cake, continues to influence the building of Protestant churches throughout the U.S.  I regret that we didn’t squeeze in a visit to the café in the church’s roomy, atmospheric crypt.  It’s a great place to refuel and revive after wandering the halls of the National Gallery across the square. 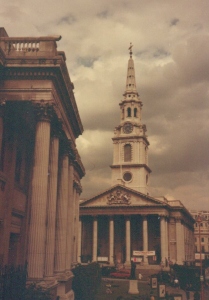 This photo from 1982 shows the church from the steps of the National Gallery. 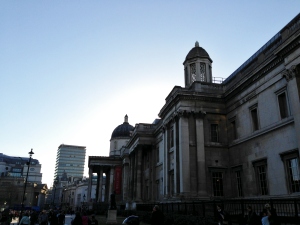 On the day of our visit, Trafalgar Square and the steps leading to the Gallery were awash in a teeming tide of humanity.  I had hoped to show my daughter some of my favorite paintings, but the crowds made me lose heart.  Spring break in London, as in Paris, has its drawbacks.  It seemed futile even to try to elbow our way over to one of the grand lions that guard Lord Nelson’s column.  Somewhat appropriately, in the waning afternoon light, the National Gallery takes on a grim, fortress-like aspect in the photo above. 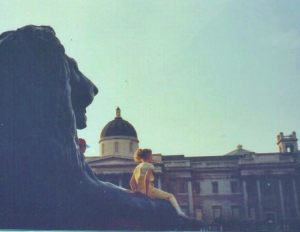 On a less hectic day in the summer of 1982, Lord Nelson’s lions, and the Gallery itself, were more accessible.

We decided to flee the area.  But a quick departure was impossible  due to the press of the crowd.  Had I never been in London during the week before Easter?   Maybe not.  During my year in the U.K., I returned home once, and that was for Easter.  Maybe the city’s always as congested at this time of the season.  Better to assume that’s the case than to think it’s been spoiled recently.

I know I’m not alone in occasionally wishing myself nearly alone (with a hand-picked group of family and friends) to experience the marvels of the world’s great cities.  As we made our way back, slowly, toward Grosvenor Square and our hotel, I considered the advantages of conducting future British travel from the serenity of the sofa via PBS and Netflix.  Under the expert guidance of, say, earnest young Endeavor Morse, or Benedict Cumberbatch’s otherworldly Sherlock, or the bright-eyed, sensibly shoed Miss Marple, one may witness matters of life and death set amidst notable U. K. monuments, without ever battling a crowd.  The older I get, the more tempting that sounds.