Our family is unintentionally following Hemingway’s footsteps in our recent vacations.  Last year in Paris, our favorite café looked toward the author’s first French bare-bones apartment on Place Contrescarpe.  During our winter trip to Key West, we found ourselves firmly in Hemingway country again.

The writer and his second wife Pauline arrived in Key West from Paris via Havana in 1928.  They hadn’t planned to linger, but the new car that Pauline’s wealthy uncle had bought for them was late in arriving.  The couple moved into an apartment above the Ford dealership while they waited for their car.  During the three weeks they spent there, Hemingway finished A Farewell to Arms, and both he and Pauline fell in love with Key West. 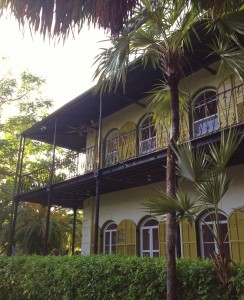 In 1931, they decided to settle on the island.  Pauline’s generous Uncle Gus (doesn’t everyone need an Uncle Gus?) purchased a spacious and beautiful but dilapidated home for them.  The Spanish Colonial style villa on Whitehead Street dates from 1851.  It was built by Asa Tift, owner of a shipwreck salvaging operation.   (The nearby Key West Shipwreck Museum tells the story of the city’s lucrative salvage industry.) The Hemingways renovated the home extensively and lived there with their two young sons until 1940. 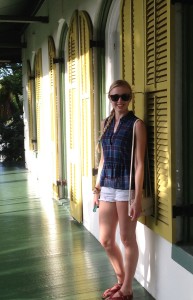 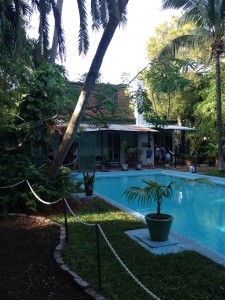 Hemingway’s large swimming pool is as well-known as his house.  The pool, the very first in Key West and within 100 miles, dates from 1937-38.  At the time, Hemingway was in Spain reporting on the Spanish Civil War.  Pauline supervised the construction, a mammoth and hugely expensive operation that involved digging through solid coral.  During the 1930s, when Key West lacked a city-wide system of fresh water, the pool was filled with salt water piped in from the water table.  It took several days to fill, and because the salt water was prone to algae growth, the pool had to be regularly drained and refilled, a laborious process. 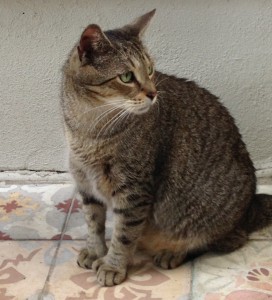 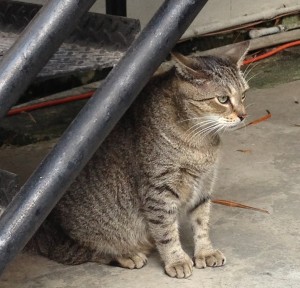 These days the most well-known residents of the Hemingway property are the fifty or so pampered polydactyl cats that roam the grounds and lounge on the furniture. A typical cat has five toes on each front paw and four on each back paw.  Polydactyls have six or more on each front paw and may have additional toes on each back paw.  The Key West felines are said to be descendants of Snow White, a polydactyl cat given to Hemingway by a ship captain.  Polydactyls were popular as ship cats because sailors considered them to bring good luck.

At feeding time at the Hemingway house, the cats head to the garden terrace in droves, providing a good opportunity to see their wide variety of toes.  Some appear to be wearing mittens because of an additional toe. 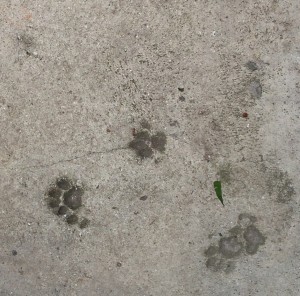 In the pavement near the garden, concrete proof of extra toes. 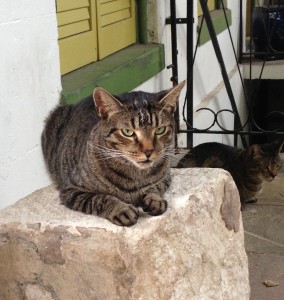 This tabby struck me as macho tough guy (perhaps in the Hemingway mold) but my daughter found him to be a sweetheart. 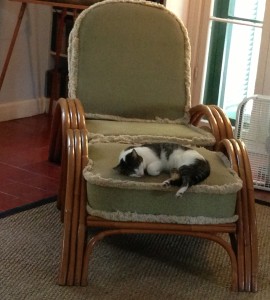 This cat has claimed a comfy spot on the hassock of a chair in Hemingway’s writing studio above the garage. 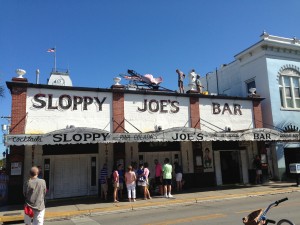 Another signature Key West attraction associated with Hemingway is Sloppy Joe’s Bar, originally owned and operated by Joe Russell, who became a close friend and fishing buddy of the author.  Hemingway began patronizing Russell’s speakeasy during Prohibition.  In the photo above, preparations are underway for the New Year’s Eve midnight conch drop. 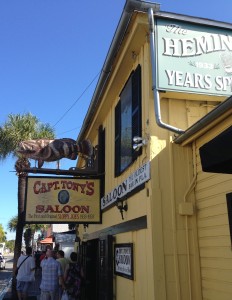 When Joe Russell’s bar officially opened on Greene Street in 1933, it was known as the Blind Pig.  With the addition of a small dance floor, it became the Silver Slipper.  Hemingway, who had frequented a bar in Havana known as Sloppy Joe’s, was instrumental in the final name change.  A rent increase that Russell refused to pay prompted a sudden change of location in 1937 to its current spot on Duval Street.  Russell and his customers were said to have carried drinks and furniture down the street to a vacant bar in the middle of the night, with service never ceasing.  The original building above, which dates from 1851, first housed an ice house and morgue.  It became Captain Tony’s Saloon in 1958.  A young Jimmy Buffet played there often in the 70s.  (The bar and its owner Tony Tarracino, a former Key West mayor, are the subject of Buffet’s song The Last Mango in Paris.) 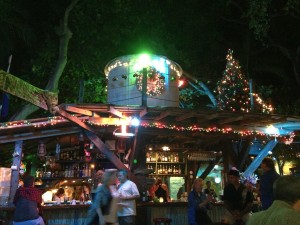 The outdoor courtyard of the Blue Heaven Restaurant and Bar on Thomas Street marks the location of the boxing ring where Hemingway refereed matches. Originally located in the back yard of the author’s home, it was moved when the pool was built.  During high season, the wait will be long to eat outside under the old trees of the merrily lighted courtyard.  We waited, and it was worth it.  Live music, a friendly, celebratory atmosphere, wandering roosters and cats, great seafood and Key Lime pie make a meal at Blue Heaven one of the quintessential Key West experiences. 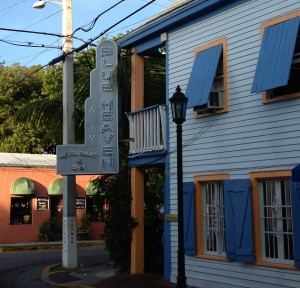