It did appear that our luck was improving.  Like the majority of customers renting cars at the Miami Airport, we’d reserved a Mustang convertible.  I’d half-expected to find a blatantly un-fun vehicle, some sensible mid-sized sedan, parked in the numbered spot.  But there it was, a silver Mustang soft-top.  Our daughter was happily agog; we hadn’t told her the details.  She’s wanted to drive a convertible since she was five and sat behind the wheel of a red Cadillac with her American Girl doll at the DC car show.  Ten years later, in possession of a learner’s permit and the actual ability to drive, she was all the more certain she preferred a roofless ride. 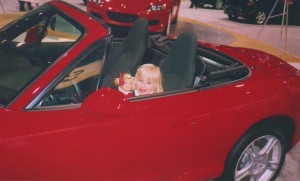 Our drive began on a promising note.  The car seemed to be in good working order.  We cruised the streets of Miami at a pleasant pace for a few miles before realizing we were heading north.  Once we found the highway toward Key West, all progress ceased.  Traffic was backed up and at a standstill.  The sunshine, which had felt wonderfully warm and welcoming a block or two back, now beat down with aggressive intensity.  We were beginning to glimpse the enormity of our error.

For a while, as we inched along, we clung to flimsy shreds of hope.  It was shortly after noon.  Maybe we were simply caught in the lunch rush.  Or maybe the traffic was horrendous because we were leaving the city.  Miami congestion, that’s all.  Yet time ticked by, with little movement and less view, thanks to the gargantuan RVs with cheery names like Sunseeker and American Spirit that hemmed us in.  We put the top up.  No need to add the further discomfort of sunburn to our misery.

As our snail’s pace took us every so slowly toward Key Largo, it was apparent that we had made a monumental rookie mistake.  We had opted to drive to Key West beginning at noon in Miami on the first Saturday after Christmas.  How could we have been so naïve?  It was the height of the high season.  Could our timing have been worse?

We should have known.  From our annual Cape Cod trip we’ve learned a thing or two about the need for careful timing when heading out to the tip of a narrow strip of land reached by a single road.  We know better than to try to cross the Sagamore Bridge to the Cape on a summer Saturday beginning any time after 8 AM.  And we never leave the Cape any later than 6 AM.  We know.  Oh, my goodness, do we know.

You’d think we might have applied the same principle to our Key West destination and flown from Miami.  But it was too late now.

As our super slo-mo highway purgatory persisted, the mood inside the sporty Mustang became increasingly grim.  My apologies for suggesting Key West in the first place did nothing to help matters.

Also, we were getting hungry.  Except for a tiny package of airline pretzels each, we hadn’t eaten since the night before.  My husband finds it absurd when overly fed Americans claim to be “starving.”  One of his signature comments is:  The body can go several weeks without food.  He’s one of those perpetually lean people capable, when it’s convenient, of consuming mass quantities without gaining an ounce.  Yet there are times when he’s oblivious to food.  He may return from work at 7:45 and realize he hasn’t had a bite since breakfast.

Now, if we were off on some endurance adventure, perhaps if we were contestants on Survivor or The Great Race, (and my husband and daughter would excel at such competitions), we would expect a significant level of deprivation and discomfort.  But we were attempting a vacation, not an exercise in hardship and fortitude.  Even H conceded that a little snack would be a great pleasure.

But we were hesitant to stop, for fear of falling further behind schedule.  Most shops and restaurants were located on the northbound side of the road, from which it would likely be difficult to get back into the line of bumper-to-bumper southbound traffic.  We drove on.  And on.

Around 4:00, somewhere not far from Marathon, we spotted a promising grocery and delicatessen on the southbound side.  This would have to do.

Grateful for the odd jumble of miscellaneous snacks we’d assembled, we were soon back on the road.  The sun was no longer  intense, so we put the top back down.  For a while, it didn’t matter that we were still creeping along.

And then, the strangest thing happened.  The pace of traffic began to pick up.  Before long, we were moving at a typical highway speed.  The scene was just as I had pictured it in my mind’s eye:  an improbably thin line of road crossing a wide expanse of gray-blue sea.  We zipped along the famous Seven-Mile Bridge, the wind very much in our hair.  Especially in mine, as I had taken my daughter’s place in the back seat.

The ocean view is made more interesting by the sections of Henry Flagler’s original railway bridge, completed in 1912, that run alongside the current roadway.  Some stretches look more or less intact, others sprout small trees and appear close to ruin.  There are ragged gaps where the old bridge has crumbled away completely.  Lines of birds, tall and small, keep serene watch along the isolated sections.

We were approaching Key West as the setting sun painted the sky in dramatic bands of pink and blue.  We wouldn’t see the sun drop into the Atlantic that evening.  What we’d thought might be a three and a half hour drive had stretched to over six hours.  It would be dark when we arrived, but at least we’d be there. 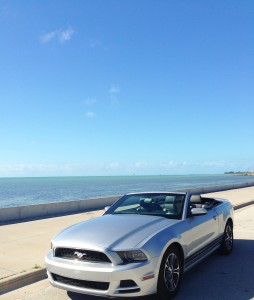 The next morning, D would get a chance to try out her dream car.