An unaccustomed sight appeared throughout Northern Virginia today:  school buses.   Due to the blizzard and what should have been an inconsequential “dusting” that preceded it, schools were closed for seven days.  During the final two weeks of January, with the snow, the MLK holiday and a teacher workday, school was in session for one day only.  During times such as this, I’m especially thankful that I like my daughter.  And while it makes me sound cold and unloving, I’m glad she’s not younger.  How pleasant it is that my constant accompaniment for her every snow venture is no longer required. 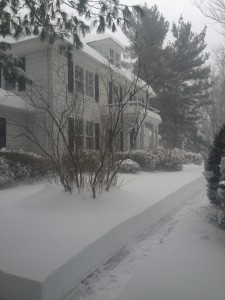 Our family’s winter storm experience was, all in all, quite enjoyable.  As blizzards go, it was a good one, at least for us.  I know there were others who weren’t nearly so lucky.  It was forecasted accurately and well in advance, allowing plenty of prep time.  The snow began right on schedule, at 1 PM on a Friday.  I was back home after a second shopping trip for those “just in case” provisions.  School had been canceled, allowing my daughter plenty of time to meet friends for an early lunch.  She was anticipating not seeing non-neighborhood buddies for a while.  Even my husband arrived home from the office well before the snow started to accumulate.

The snow fell according to plan, persistently and without a break, until the following evening.  This wasn’t a showy storm.  The flakes were small but steady.  Saturday brought some wind, but no howling gales.  And most important:  our area never lost power.  We had heat, light, hot water and all those interior comforts that are especially cherished when the weather outside is icy. 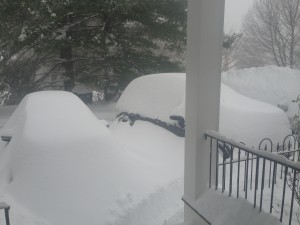 My husband was ready with the snow blower he’d bought just after the Blizzard of 2010.  He was told he’d probably never need something that big down here in Virginia.  He wanted it anyway.  Growing up in Rochester, he dreamed of owning a powerful, sleek snow blower the way some kids dream of owning a Maserati. 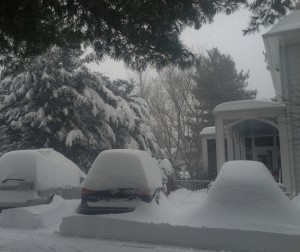 In this case, it was a dream worth realizing.  The big blower came in very handy. 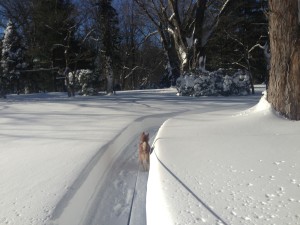 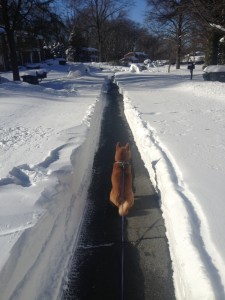 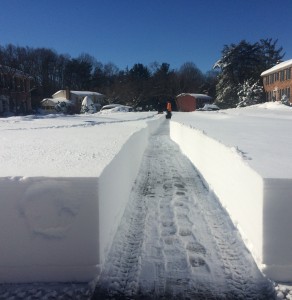 He opened up a path on a side street that was untouched by plows for several days.  He continued up and down that street until he’d cleared a lane wide enough for a car to pass through. This photo, taken by my daughter, shows how the sharply cut snow sections resemble two huge layers of angel food cake. 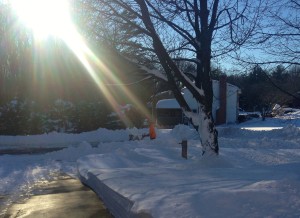 Here he is, returning from a full day of snow blowing, the afternoon sun’s rays falling on him like a benediction.  You could say that all this work could have been accomplished by shoveling.  That might be theoretically true, but it would have required far more helping hands and strong backs than were available.  Plus many, many additional hours.  His work was all the more valuable because it would be several more days before the streets into our neighborhood would be approached by snow plows.

With every gathering storm, I’ve always been grateful that I can ride it out with a snow management and removal expert by my side.  This was certainly true during the Blizzard of 2016.  A good boy from Rochester is indeed a good thing.