We’re more than two weeks into January, so it must be about time for my final Christmas post.  Soon, it will even be time to begin taking down the holiday decorations.  I tend to postpone this process further each year.  It’s my way of pretending that time isn’t flying by quite as fast at it really is.

Christmas was almost upon us, and my husband had mentioned no grand plan for what has become his annual inventive presentation of our daughter’s gifts.  Had his years of Extreme Gift Wrapping come to an end?   They began in earnest in 2011, and every year since, he’s been under pressure to come up with a new scheme.  This becomes ever more difficult, but still, I doubted he’d simply give up.  (For his earlier efforts, see here, here, here, and  here.)

He hadn’t.  On the morning of Christmas Eve, a small blue gift box appeared to be floating just in front of the tree.  Close inspection revealed that it was attached to the ceiling with fishing line. 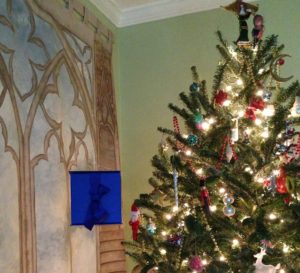 Upon returning that evening after our church’s live nativity and Christmas Eve service, D and I found that seven other boxes, of various sizes and colors, had been added.  They all appeared to hover in mid-air. 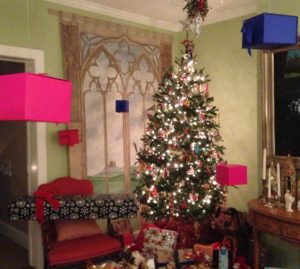 The effect was charming, almost magical.  Hats off to my husband.  He’d found a fresh new approach.  No construction was involved this year.  And not even any actual wrapping.  It was a sophisticated presentation, suitable for a young woman who would soon be heading off to college. 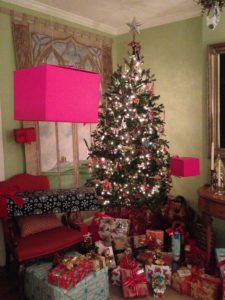 What will he do next Christmas, I wonder?  I bet he’s already got some ideas.  Our daughter should be home from somewhere, we still know not where, for her first college winter break.  My best guess is this: the tradition of Extreme Gift Wrapping will continue. 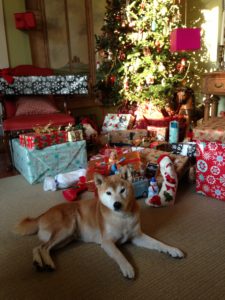 Kiko, of course, couldn’t care less about floating gifts or elaborate packaging.  But he quickly found his stocking filled with favorite treats and a corduroy rabbit equipped with several squeakers.