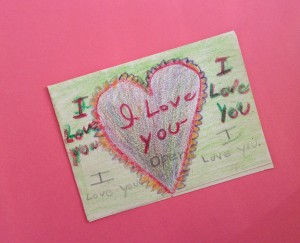 When I was growing up, the exchange of love notes was among the essential elementary school experiences.  Most of us who came of age in the 60s and 70s, I would bet, took some part in the process, as sender, receiver, envious onlooker, or all of the above.  Because, as I’ve mentioned, I’m a saver, a documentarian of life’s minutiae, I have proof that I was, at least for a brief time, a player in that game.

A recent search for some tedious document in the chaos of our home office uncovered something I found far more interesting:  a Raggedy Anne stationery box stuffed with elementary school memorabilia.  Among various artifacts, it contains several notes I received in third grade.  I wish I could remember how I reacted when I received these as an eight-year old.  I was probably flattered, but puzzled.  Evidently I appreciated them, or I wouldn’t have saved them.  I do know that in recent years, they have never failed to make me smile.

In third grade, battling my OCD demons kept me too stressed and distracted to consider romance.  (See In the Way Back, the Old Swing Set, Going Back to Nature, July 2013.)  Schoolwork helped to silence the exhausting voices in my head, so I threw myself with frenzied gusto into learning my multiplication tables, reading Scholastic books and writing stories that starred my dog and stuffed animals.  I tried to keep my craziness under wraps during school hours.  These notes suggest that maybe I did.  Or maybe the sender wasn’t put off by a touch of crazy.  Maybe he was a little crazy himself.  Who knows, now?  Anyway, I’m glad I kept the notes.   No doubt there are those who’d say I’m insane for saving them all these years.

I treasure these old notes, a testament to the sender’s ingenuity and thoroughness. The one shown above follows a traditional format.  On heavy folded construction paper, a heart with carefully ruffled edges is drawn in pencil and colored in crayon. The message is simple, direct and emphatic.  I love you appears seven times throughout.  It’s signed by one boy, Danny, on the inside.  Oddly, on the back, there are two signatures:  Danny and Greg, accompanied by a pencil drawing that could be a flying saucer but is more likely a pair of lips.  Inside there is an additional message:  Kiss me after school please.  There was much difficulty with the writing and spelling of please.  It required several erasures, a cross-out and a correction.

Because Danny (now Dan) and I are Facebook friends despite not having seen one another in over thirty years, we’ve been able to compare our recollections of the circumstances surrounding the note.  Soon after we got back in touch, he asked if I remembered receiving a love note from him in third grade.  He was more than surprised to learn that not only did I remember, I still had the note.  Dan distinctly recalled being dared by another boy (Bill, not Greg) to put a love note in my desk.  He took the dare and tucked the note in my desk after I’d left school, planning to retrieve it early the next morning before I arrived.  He forgot about the last part, and so when he entered the classroom he saw me unfolding the paper.

Dan had no memory of the note’s appearance or wording.  He couldn’t remember conspiring with Greg in creating it.  He was completely astonished at the Kiss me message.  That didn’t sound at all like him at all, he said.  I had always thought that very same thing.  I remember Danny as a very funny boy, one who’d do anything for a laugh.  But he was quite shy.  I couldn’t see him demanding after-school kisses.  Maybe I assumed that was Greg’s handiwork.  I’d say he was bolder kid, one with a somewhat devil-may-care attitude.  And yes, I’m Facebook friends with Greg after all these years, as well.  When I asked if he remembered co-authoring a love note to me, he did not.  His response was diplomatic; he didn’t want to sound callous or disappoint me.  His heart, he gently but clearly recalled, belonged to another third grade girl.

Dan observed that the Kiss me sentence appears to have been written by a different hand.  The pencil lead is darker, and the words are printed, unlike Danny’s all-cursive I love you above it and those that appear on the front.  All the writing on the back, including both signatures, would appear to be written by the Kiss me author.  Dan concluded that, shy as he was, he must have mentioned the dare to Greg, who stepped in to offer moral support.  He probably wrote the Kiss me line on impulse, thinking, Why not?  Maybe this will get interesting!  Could be that’s when he decided to sign his own name and Danny’s, putting himself in the running for the kiss.

The note didn’t prompt me to kiss anyone after school.  I was definitely not that kind of girl in third grade.  But  these decades later, it’s nice to look back and know that I was asked.  And to know that someone, perhaps with a little encouragement from a friend, decided I was worth the effort of all that careful coloring and the writing of I Love You seven times.  That makes it  a note worth saving. 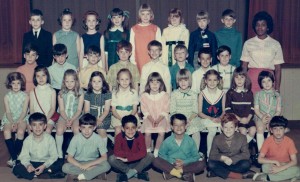 The photo above shows our second grade class with our teacher Mrs. Small, the year before the note was written.  My third grade photo has gone missing.  Dan is the sweet-faced boy at the left end of the top row.  His mother tended to dress him in a suit on picture day.  I’m second from the right on the top row, wearing, of course, an outfit made entirely by my mother, down to my red, white and blue scarf, my hair pulled back in a pony tail. Years ago, when I first showed this photo to my daughter to see if she could find me, she had considerable difficulty.  After she pointed questioningly to many girls who were clearly not me, I grew a little exasperated and showed her.  Oh, she said, with much surprise.  I thought that was a boy, with short hair and a tie.  Greg does not appear in this photo; he was in the other second grade class that year.