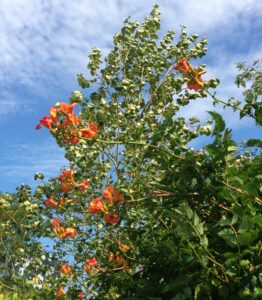 Five years have passed since I began writing Wild Trumpet Vine.  In the space of that half decade, there have been many changes, naturally.  We passed some major milestones, we faced some challenges, and of course we grew older.  Looking back on the last five years, it gives me comfort to see that our family coped.  Maybe we even grew a little wiser.  I hope so.  We’ll need wisdom.  More daunting challenges lie ahead.

In the fall of 2011, our daughter was starting middle school.  Seven years of elementary school were behind her, and soon she would be a teenager.  Since then, she made the leap into high school.  She became a licensed driver.  Now, our daughter is a senior, and on the verge of an even bigger leap.   We’ve done our family college visits.  The ongoing process is in her hands now.  Our daughter’s future stretches before her. 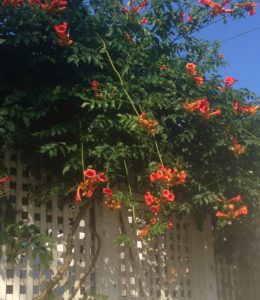 As for H and me, we’re all too conscious of seeming more elderly with every successive stage in our daughter’s life.  We could consider ourselves young when she was small and looked like a child.  Now that she will soon be out of high school, now that she looks like a young woman, our own youth, we realize, is largely an illusion.

But we needn’t act old.  About a year ago, H began playing ice hockey once or twice a week, something he’s been wanting to do since he captained a rag-tag grad school intramural team at Princeton.  When windsurfing was his only hobby, his free time was spent mostly feeling sad because there was no wind.  Few opportunities for windsurfing arise in northern Virginia; it’s a sport that requires long stretches of time in an appropriately windy locale, such as Cape Cod or Aruba.  Hockey rinks are more conveniently located.  He’s a happier guy these days.

And I’m happier, too.   I see good friends on a more regular basis now, and that can’t help but brighten the days.  Five years ago, Kiko and I usually began our early morning walks alone.  We typically chatted with many acquaintances along the way; sometimes we met neighbors and walked a while together.   About two years ago we began walking most weekdays with another neighbor and her dog.  Before long, another friend had joined us with her dog.  We were having fun, and evidently it showed.  A third friend soon joined in.  Now there are at least five of us plus our dogs.  Because we often run into other neighbors, the dog parade may swell to eight or so.  It’s become our morning social hour, one we all hate to miss. 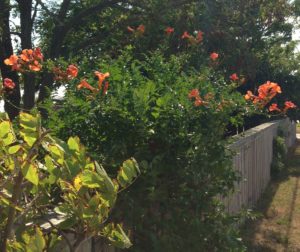 Five years ago, Kiko was four, probably in his prime.  Although no doubt it was already far too late, our family continued to argue about training approaches.  Overcoming his headstrong nature was still put forth as a real possibility by my husband and daughter.  His stubbornness was an ongoing source of family friction. (See An Evening of Discontent and The Joys and Travails of Walking our Strange Little Dog).

In the language of dog food commercials, Kiko is now a senior dog.  He’s as determined as always in his absolute, driving need to go this way or that.  He has no idea that he’s by far the smallest member of our dog walking pack (which includes a Rhodesian Ridgeback, a Doberman, a Labradoodle and a Golden Doodle).   But Kiko is the unquestioned leader; he chooses the path according to the smells that beckon most keenly.  Yielding to his iron will is more pleasant that battling it.  He’s still fast, although his bursts of speed are shorter-lived. He continues to enjoy wowing the lady dogs with his fleetness of foot and incredible turning radius.  But now he’s very likely to plop down immediately afterwards, preferably for a lengthy rest, in the middle of the street, if possible.  He’s trim and svelte.  His appearance has changed very little.  Except for one detail:  on top of his head, above the center patch of dark sesame coloring, he has a blurred triangle of lighter fur, as though someone had smudged him with bleach. 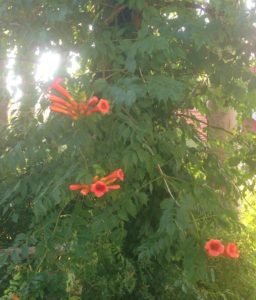 Five years ago, my parents were still frequently driving back and forth from Atlanta to our home in Virginia.  They were here watching D and her friends head out trick-or-treating, and to open gifts with us on Christmas morning, to celebrate Easter.  In attitude, demeanor and appearance, they seemed far younger than their actual age.

Time started to catch up with my father about two years ago.  He had two major surgeries in as many years.  He’d always been fit and active.  He woke up feeling good; he rarely had an ache or pain.  But his last surgery left him weakened, almost frail.  He was becoming more and more sedentary.  When he stood up, he was dangerously wobbly.  And it was becoming clear that he was suffering from some form of dementia.  We tried to see it as no big deal.  It was his short-term memory that was primarily affected.  Did it really matter that he complimented me on my sweater every five minutes?  Or offered to get me a glass of orange juice even more repeatedly than usual?  The disease compounded Daddy’s graciousness.  He’d always made kind, sweet comments.  We simply heard the same ones more often.  But in recent months, the changes were increasingly profound.  During one visit he remarked that he couldn’t remember my birthday.  Another time he asked if I had any sisters.  And was I dating anyone interesting?  I told H it was time he got to Atlanta, before Daddy started actively matchmaking.  He had never been an overly protective father; he’d always wanted me to go out and have fun.  Throughout it all, he kept his sense of humor.

For most of his life, my father had taken care of my mother, and the shift was very difficult for her.  He had done the driving, the grocery shopping, the bill paying, the handling of most paperwork, all the car stuff.  He had been there with his reassuring presence.  Suddenly Daddy depended on Mama to take care of him.  But he forgot that he needed her help, and that made it even more difficult.  It continually slipped his mind that there were many things he could no longer do.  Understandably, he didn’t want to remember.  He’d been used to doing so much.  Mama worried that he’d go outside without her knowing, that he’d fall on the steps or the steep front bank.  When she told him he couldn’t go outside on his own, he pleaded earnestly and poignantly, like a little boy: Why? Why can’t I go outside?  The thought of that exchange still brings tears to her eyes.  During our final visit in July, H, D and I were doing yard work.  Daddy appeared, as if from nowhere; he could still move surprisingly fast when no one was looking.  He was poised to climb the ladder, an old, rickety thing propped against the house.  We got to him just in time.

It took Mama a while to adjust to shouldering the burden of being in charge.  I think she was only just coming to terms with it when Daddy died.  My parents would have been married sixty-one years this month.  For her, his absence is a deep and yawning void.

So, what will the next five years bring?  I don’t like to speculate on the future.  Even when I was young, I hated that question: Where do you see yourself in five years?  In ten?  But looking back on the last five gives me strength to know that we’ll continue to deal with life’s changes as they come.  Like the wild trumpet vine inching along the fencerows, we’ll persevere, through grief, through joy.  My hope is that we will find the assurance that my father experienced.  We’ll see his smile and hear him say: Hey, no need to worry.  It’s all going to be OK. 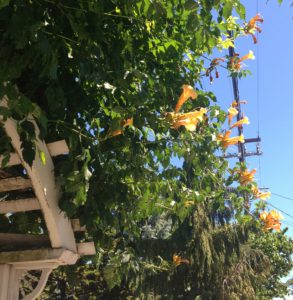