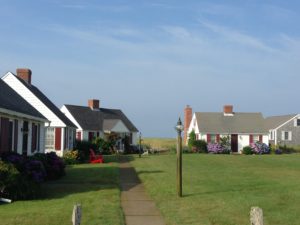 Shore Road, Route 6A, is our Main Street while we’re in Cape Cod, and I walk it nearly every morning.  As in our little cottage complex, major changes along the road are refreshingly few and far between.  Its scenery is almost as familiar to me as my childhood back yard.  My Shore Road walks serve to further sustain the illusion of timelessness in Truro. 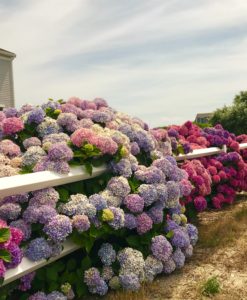 Fence-hugging hydrangeas, for example, which thrive in the moist salty air, are always bountiful and glorious. 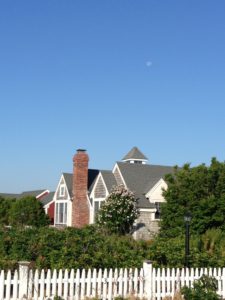 Typically, any changes along this thin ribbon of land by the bay are so subtle that they serve to reinforce the unchanging nature of the place.  Most of the homes and cottage groupings appear largely the same, year after year after year.  Routine maintenance, not extreme renovation, is the guiding principle.  The small structures of this condominium complex, above, continue to be nestled snugly amid the roses, much as they have been for nearly two decades.  Hours of diligent pruning, no doubt, keep the surrounding plantings looking luxuriantly abundant but not overpowering. 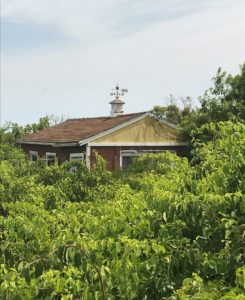 Nature can easily get the upper hand, if left unchecked, as it has above.  Each year, untamed, weedy foliage encroaches a bit more around this small, sagging, cupola-topped cabin.  Considering the high value of real estate along the bay, there are a surprising number of small Shore Road structures, some barely bigger than sheds, that exist in a state of ongoing gradual decay.  They appear to lack all creature comforts, but some show signs of sporadic human occupation.  This gives them an air of mystery that adds to their appeal. 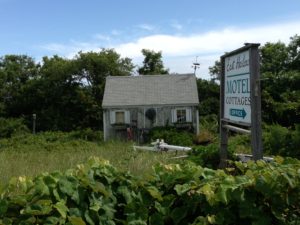 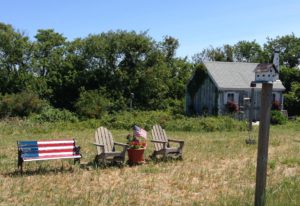 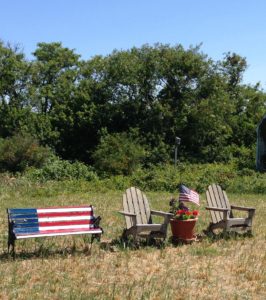 There are certain areas where the tug-of-war between nature and the attempt to subjugate it is particularly evident.  For as long as I’ve walked Shore Road, the large lot above has been occupied by a small semi-dilapidated cottage, whimsical bird houses on tall posts, and the occasional boat.  Some years, the foliage reigns victorious, as in the top photo, dating from 2013, where the cottage appears to float in a sea of tall grass and grapevines.  The following year, the weeds were mown and vines cut back substantially.  Flower boxes adorned the cottage’s front windows.  Near the road, a patriotic tableau had been assembled: a wooden bench painted like the flag, Adirondack chairs and a pot of geraniums 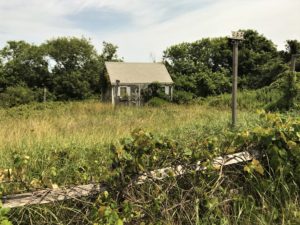 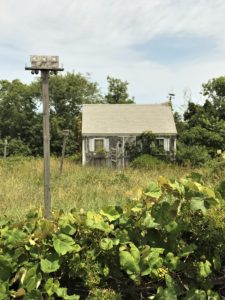 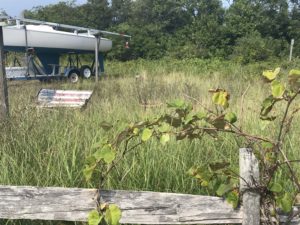 Since 2014, nature has been allowed its riotous advance.  Once again, the cottage is enveloped by high grass and unruly foliage.  The flag bench, its paint faded, appears to be sighing toward collapse, and the split-rail fence groans under a heavy tangle of grapevines.  The chairs have disappeared, and even the bird houses are in advanced decline.  The lighthouse is unrecognizable, and the caboose is little more than a façade.  (See Shore Road Scenes in Cape Cod, August 24, 2012.)  Next year, will the progression toward wildness and ruin continue?  Or will there be another effort toward taming nature and renovating the manmade?  I hope it’s one or the other, and not a dreaded third option:  a gleaming new structure that stands out starkly from the pleasantly worn and familiar Shore Road sights I cherish. 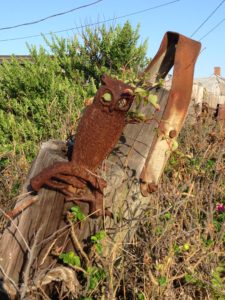 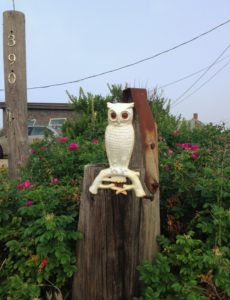 I’m not averse to some instances of refurbishment.  Two years ago, for example, this rusty roadside owl received a coat of white paint and amber-colored eyes.  Such measured, unobtrusive alteration I can wholeheartedly support.  I appreciate it all the more knowing that it’s likely to be overlooked.  I enjoy thinking I know Shore Road the way I know an old companion. 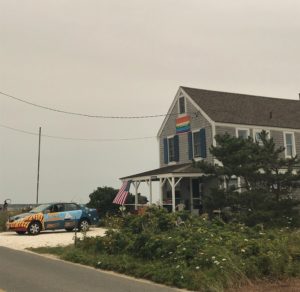 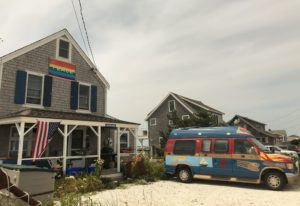 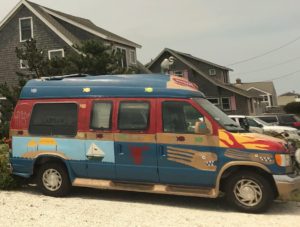 I can also welcome a unique addition that fits in well with that which already exists.  The gray shingled house above, with its American flag and rainbow banner bearing the word PEACE, looks essentially the same every year.  Several years ago I noticed an interesting vehicle parked in front, a small car colorfully painted with a variety of sea creatures in a folk art style.  This year the little car gained a sibling, a minivan painted with similar colors and designs: sharks, lobsters, fish and  sailing scenes.  A white plastic egret keeps watch from the roof.  The light-hearted, slightly eccentric spirit of these vehicles is in perfect sync with the PEACE house and with the Outer Cape.  (They remind me of the Key West Don’t Dredge on Me truck encrusted with sea creatures.  See Uniquely Key West, April 24, 2015.)

It’s been five years since I last wrote about the Shore Road sights I hold dear.  As I began looking back and comparing this summer’s photos to those from earlier years, I was afraid that the idea of sameness might prove to be primarily in my mind.  Maybe my old friend has changed more than I’d like to admit?

Generally, I don’t think so.  This narrow strip of land still seems to be largely immune to the accelerated pace of change that characterizes my former Atlanta neighborhood or the DC suburbs where I now live.  Every return visit brings this reassurance: the familiar sights of Shore Road, and its inimitable essence, they endure.  Perhaps I hope that through proximity, this immutability is contagious.  By spending time each summer in a timeless place, can I slow my own aging process?  Or at least feed the fantasy?  These days, it couldn’t hurt.